Canada based author Mandipa Shumba has been praised by former United States of America Barack Obama for her prowess.

The former US president hailed the 20-year-old’s book Legends with Dreams, which unpacks the duties of the youth and helps them find their voices.

Mandipa said she wrote to Obama for him to get a glimpse of her book and she was amazed getting the response.

“I only wrote to him once and I was surprised that he responded appreciating my work, it really humbled me.

“For me to get such an endorsement, it shows that I am in the right track,” said Mandipa.

Mandipa, who grew up in Kadoma, said she was inspired by the Zimbabwean liberation struggle to come up with her poetry collection.

“I have always loved writing poetry and Legends with Dreams subtitled The Untold Story is my second poetry collection that is inspired by the events of Zimbabwe liberation struggle leading to Zimbabwe’s independence in 1980,” she said. 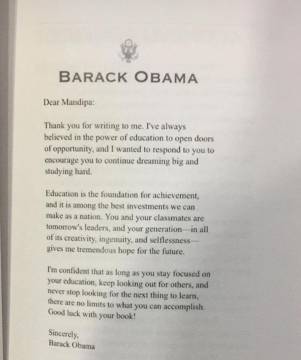 The Untold Story writer said it was difficult for her coming up with the book as she faced a number of challenges.

“Financial constraints were one big challenge as a self-published book even though my mentor encouraged me to keep on working,” said Mandipa who doubles as a poet.

Mandipa said she owes a lot more of her book to her father.

“My father was one big motivation; and he kept pushing me.

“I want to do my sponsors and my parents proud they deserve this from me,” she said.

The Global Political Economy student said she has already started writing more poetry but she will not be releasing anytime soon.

“I have started writing more but it will take a while to get the next book even though I can’t wait.

“Let’s get the degree first,” she said. H-Metro