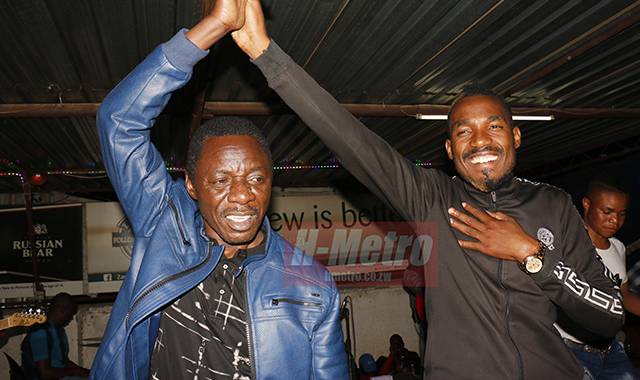 He joined Macheso on stage during his performance at Tanza Centre, thrilling a bumper crowd that had turned up for the show.

The flamboyant singer then asked for a moment to address the crowd which Macheso accepted only to tell the full house that he came to ask for a collaboration.

“Let me take this opportunity before your fans Mdhara Macheso to tell you that I am kindly asking for a collaboration.

“I want you to endorse my career and that can only be achieved by doing a song with you. I could have come home but I decided to do it here before these fans.

Carlos Green made reference to dancehall chanter Freeman who recently recorded a song – Ngaibake –with Macheso.

“I also want the fans to know that I actually envy Freeman who recently recorded a song with Macheso.

“It is something that a number of musicians in Zimbabwe wish, it is an endorsement everyone wants,” he said.

Though Macheso did not respond to the request by word of mouth, he could be seen nodding his head while smiling as Carlos was speaking.

Speaking to H-Metro on the sidelines of the show, Carlos Green told H-Metro said it has been always his wish to record a song with Macheso.

“It has been always my wish since I ventured into the music industry. He is one the top artistes in the country and I can tell you that everyone wants to have a collabo with him.

“I came here to just watch him perform because I am a fan and when I heard him performing the song he did with Freeman, I thought it’s time to make my request.

“I also wanted to get the endorsement to his fans and now they know that I respect their icon,” added Carlos Green. H-Metro