Businesswoman and philanthropist Luminista Jemwa caused a stir in Mbare when she ‘made money rain’ at Mupedzanhamo Flea Market last Saturday. 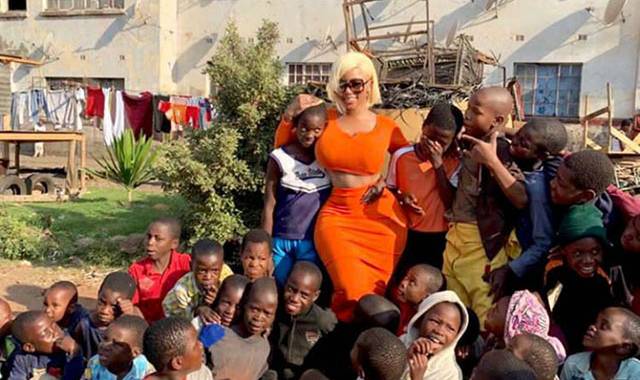 She passed through Mupedzanhamo on her way to Chillspot Records whilst having her tour of Mbare.

Upon her entrance at the flea market, the curvaceous and good looking Lumi had several men in the market twisting and turning their heads as they wanted to get a glimpse of the beauty.

She is believed to have spent RTGS$40 000 on clothes for girl children in her bid to support the girl child.

Fantan, Levels and Dhama sentenced to six months in jail…

Fantan, Levels and colleagues to spend another night behind…

“I was very touched with the hustle women in Mbare go through and I felt shopping here was a way of supporting them.

“I really appreciate their hustle and it’s good to have women that stand strong no matter the circumstances.

“I am for girl power and that’s why I shopped from women and also bought clothes for girl children.

“The experience was awesome and really made me appreciate Mbare more and all the hustle that goes around it.

‘It’s definitely not the last time I will be visiting this place,” she said.

Fantan, Levels and Dhama sentenced to six months in jail over Mbare show

Fantan, Levels and colleagues to spend another night behind bars