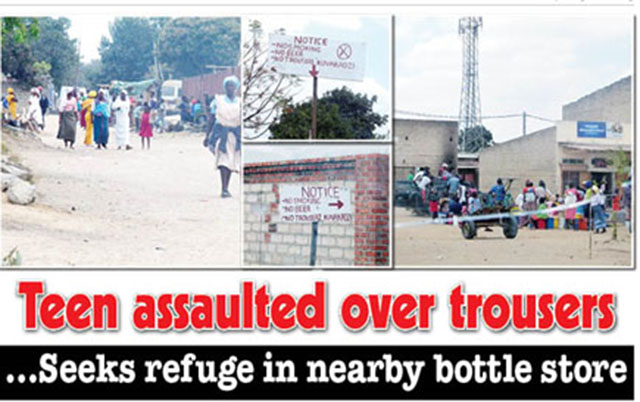 A 14-YEAR-OLD Chitungwiza girl was assaulted by a Johane Masowe mob for wearing a pair of trousers in their suburb.

The Chitungwiza Unit E area is a community which lives Johane Masowe sect members, and at every entry point, there is a sign post which reads; “No Smoking, No Beers, No Trousers vakadzi”.

The girl, Marceline Machaya – not her real name – is reported to have been passing through one of the houses in Unit E and this prompted the community members to gang up against her.

Tawanda Muchera, a resident who was at Unit E Shopping Centre in the area, told H-Metro that Johane Masowe members started beating her up with sticks while children splashed her with mud and hurled insults on her.

Johane Masowe Way of Worshipping and Life: The Truth vs…

Why do Masowe reject the scriptures that Jesus Christ…

“They beat her up badly, and she then ran for safety in a nearby bottle store, she had to hide inside for about three hours as the crowd waited for her to come outside.

“The people were so angry that they really wanted her head but the police came and rescued her,” he said.

Godfrey Munondo of the Johane Masowe sect and a resident in the Unit E suburb told this publication that their community has a way of life which needs to be respected.

“We acquired this area as Johane Masowe church, people have to realise that when they pass through they must observe and follow our church doctrine.

“We do not allow our women to wear trousers since it tarnishes the true reflection of a human being and as you can see I cannot wear a short because it’s not allowed in this area,” said Munondo.

Member of Parliament for Zengeza East Goodrich Chimbaira who is also a Johane Masowe member, said:

“In my capacity as a Member of Parliament, I condemn what happened to the girl and the people behind it.

“This area is not a private property where people are not allowed to do certain things and everyone has freedom to wear whatever he or she wants to.

“We actually accommodated others who now live among us but are not of Johane Masowe church, so people have to be tolerant of other cultures and if they want to have such kind of culture they better construct a wall where no-one can enter,” he said.

H-Metro spoke to the girl who said she was assaulted by a group of men and women.

“They were big men and women who beat me up while some children were harassing me, throwing stones and mud on my face.

“They shouted at me and I was confused, I didn’t know what to do or where to run to.

“I live with my dad but he is not here and I do not stay with my mother who is somewhere,” she said.

Marshal Nyamhondoro, a Johane Masowe member and a resident of Unit E, said:

“We cannot do anything but protect our neighborhood because these thugs come from beerhalls during the night and have sex here while others are smoking mbanje.

“We have seen even school kids who pass through here hugging each other, so it’s bad, we have to keep our area clean because our church comes first and this is a sacred area,” said Nyamhondoro.

A police officer at the Chitungwiza Town Centre said that there was a report from a woman who had come to open a docket accusing the girl that she instead beat her child during the scuffle.

“The people who came here decided to bury the hatchet, and did not open a docket, so there is nothing here,” she said. H Metro

Johane Masowe Way of Worshipping and Life: The Truth vs Myths and Lies

Why do Masowe reject the scriptures that Jesus Christ endorsed?