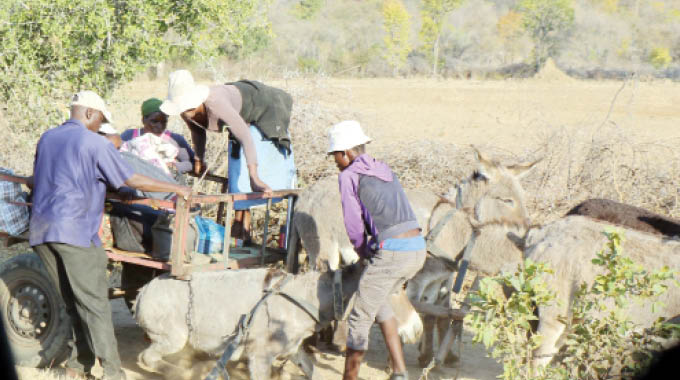 “I can confirm that we recorded two cases of scotch cart mishaps which occurred in Gwanda and Sun Yet Sen where three people died. The first incident occurred at around 10AM near Mtandawenema Primary School in Gwanda. Bongani Moyo (16) was driving a donkey drawn scotch cart along Garanyemba- Mtandawenema Road with one passenger, Welcome Dube, who is aged nine, on board.

“When he reached the five kilometre peg near Mtandawenema Primary School the scotch cart hit a tree stump, overturned once and threw them out. Welcome sustained severe head injuries and died on the spot. Bongani sustained head injuries and was transported to Gwanda Provincial Hospital where he died upon admission,” he said.

Chief Insp Ndebele said the second incident occurred at around 6PM on the same day in Sun Yet Sen.

He said Leopatra Mpofu (20) of Mazwi Village was driving a scotch cart along Khayalami Bush Road with Abraham Mlilo (5) also from the same village as a passenger when the accident occurred.

Chief Insp Ndebele said as they were approaching Khayalami Business Centre, the scotch cart hit a heap of sand and overturned once and Mpofu and Abraham fell out. He said Abraham sustained head injuries and died on the spot while Mpofu escaped unharmed.

Chief Insp Ndebele appealed to community members to desist from travelling in scotch carts when there is no-one guiding the animals.

“We continue to urge people to ensure that when travelling in scotch carts they have someone to lead the animals. Alternatively people have to use reins to guide their animals as failure to do this has caused many scotch cart accidents.

“Adults shouldn’t allow children to use scotch carts unsupervised,” he said. The Chronicle

Tout ‘kills’ cousin, pretends to be an informant