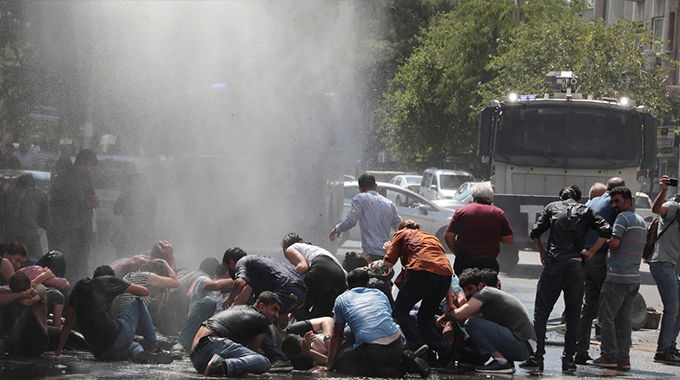 The ministry also said it had launched an operation with some 2 300 commandos against militant fighters of the outlawed Kurdistan Workers’ Party (PKK) in southeastern provinces.

The mayors of three major southeastern cities – Diyarbakir, Mardin, and Van – are accused of various crimes including membership of a terrorist organisation and spreading terrorist group propaganda, the ministry said in a statement.

President Tayyip Erdogan had warned ahead of local elections in March of such a move against elected officials if they were found to have had connections to the PKK.

17 killed by car bomb in Turkey-controlled region of Syria:…

“For the health of the investigations, they have been temporarily removed from their posts as a precaution,” the ministry said, referring to Diyarbakir Mayor Selcuk Mizrakli, Mardin Mayor Ahmet Turk and Van Mayor Bedia Ozgokce Ertan.

Police detained 418 people in 29 provinces in a related investigation targeting suspects with links to the PKK, the ministry added.

The pro-Kurdish Peoples’ Democratic Party (HDP), to which the three mayors belong, said they had been dismissed “on an order based on lies and illegal justifications”.

“This is a new and clear political coup. It is a clear and hostile stance against the political will of the Kurdish people,” the HDP executive board said in a written statement.

It said the three mayors had been elected with between 53percent to 63percent of the vote in their cities in March and called for support from other political parties.

“This is not just the problem of the HDP and the Kurdish people. It is the shared problem of all Turkey’s peoples and all democratic forces,” it added.

Veli Agbaba, deputy leader of the main opposition Republican People’s Party (CHP), wrote on Twitter that the dismissals were tantamount to fascism and a blow against democracy, while Istanbul’s CHP mayor, Ekrem Imamoglu, also slammed the move.

“Negating the will of the people is unacceptable,” he wrote on Twitter. Imamoglu himself was removed from office over irregularities shortly after coming to power in the March election but won a re-run election in June.

More unusually, Turkey’s former president Abdullah Gul and ex-prime minister Ahmet Davutoglu, once allies of Erdogan from his AK Party who have emerged as potential political opponents, said on Twitter the dismissals were out of line with democracy.

The removal of the mayors echoed the dismissal of dozens of mayors in 2016 over similar accusations, part of a purge that began after a failed coup. Nearly 100 mayors and thousands of party members were jailed in a crackdown that drew expressions of concern from the United States and European Union.

Erdogan warned before the March elections that HDP mayors could again be dismissed if they, like their predecessors, were deemed to have ties to militants.

Erdogan frequently accuses the HDP of links to the PKK, which is designated a terrorist group by Turkey, the EU and the United States. The HDP denies such links.

The PKK launched an insurgency against the Turkish state in 1984. More than 40 000 people have been killed in the conflict.— Reuters.

17 killed by car bomb in Turkey-controlled region of Syria: Ankara