Brexit: ‘No prospect’ of a deal unless backstop is dropped

Unless the UK’s withdrawal agreement with Brussels is reopened and the backstop abolished there is no prospect of a deal, No 10 has said. 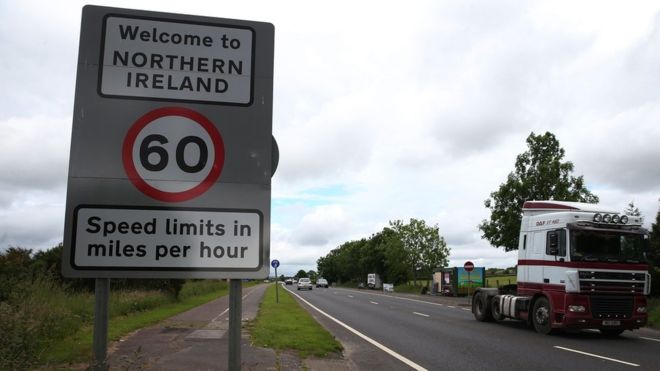 The strong statement came after the EU pushed back against Boris Johnson’s proposal to implement “alternative arrangements” for the UK-Irish border.

Mr Johnson has said the backstop is “anti-democratic” and must be scrapped.

But Donald Tusk said it was “an insurance to avoid a hard border on the island of Ireland”.

Meanwhile, the government has said UK officials will stop attending most EU meetings from 1 September.

The Department for Exiting the European Union said it would “unshackle” them from discussions “about the future of the Union after the UK has left” and allow them to focus on “our immediate national priorities”.

This week Mr Johnson will meet German Chancellor Angela Merkel and French President Emmanuel Macron for the first time since entering No 10.

Ahead of that, in a letter to European Council President Tusk, he called for the backstop to be removed from the withdrawal agreement reached between the EU and his predecessor, Theresa May, arguing it risked undermining the Northern Irish peace process.

The border is a matter of great political, security and diplomatic sensitivity, and both the UK and EU agree that whatever happens after Brexit there should be no new physical checks or infrastructure at the frontier.

The backstop is a position of last resort to guarantee that, but if implemented, it would see Northern Ireland stay aligned to some rules of the EU single market.

It would also involve a temporary single customs territory, effectively keeping the whole of the UK in the EU customs union.

Mrs May’s withdrawal agreement has been voted down three times by MPs.

A series of voices from the European side rejected Mr Johnson’s assertions.

This was the reality “even if they do not admit it”, he added.

The European Commission said Mr Johnson’s letter did not contain a “legally operational solution” to prevent a hard Irish border.

“It does not set out what any alternative arrangements could be,” a spokeswoman said, and “recognises that there is no guarantee such arrangements would be in place by the end of the transitional period”.

Guy Verhofstadt, Brexit spokesman for the European Parliament, said the backstop was “a vital insurance policy… supported by the people of the island of Ireland”.

And speaking in Iceland, Chancellor Merkel said: “Once we have a practical solution to ensure that the Good Friday Agreement continues to apply, then we don’t need the backstop of course.”

A Downing Street spokesperson insisted the UK government was “ready to negotiate, in good faith, an alternative to the backstop, with provisions to ensure that the Irish border issues are dealt with where they should always have been: in the negotiations on the future agreement between the UK and the EU”. BBC News