DERBY FINDS ITS SOUL . . . Fans, players combine to turn back the hands of time

The Harare Derby fought back, after years of mediocrity, to produce a spectacle at Rufaro yesterday — two goals late in the first half, a penalty appeal that was turned down and a bumper crowd to witness the show. 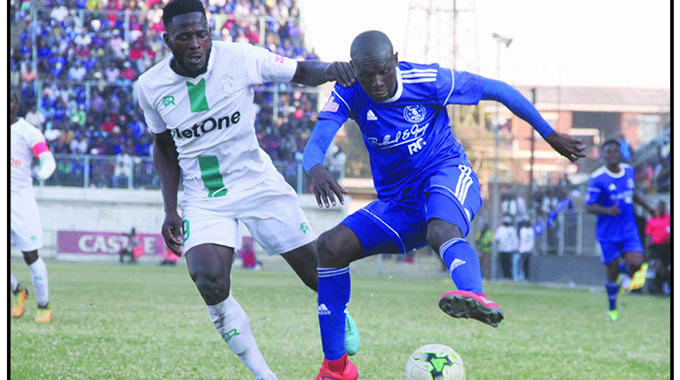 This was the Harare Derby, as we have known it in the past, and just as well it ended with a share of the spoils.

In-form midfielder Joel Ngodzo, one of the best three players in the domestic Premiership, and Simbarashe Nhivi scored the all-important goals within the last two minutes of the first half.

DeMbare roving rightback Emmauel Jalai had a dream debut in the Harare Derby, with a performance that made a mockery of his youthfulness, while Method Mwanjali was a rock in the Green Machine defence.

Makepekepe, who enjoyed the edge over their opponents with their neat passing game in the early stages and control of the midfield, got a deserved lead from Ngodzo’s powerful grounder.

The midfielder had been teed up by skipper Hardlife Zvirekwi from a set-piece just outside the penalty box.

The Green Machine had won a freekick following a crude challenge on overlapping defender Carlos Rusere by newboy Archford Gutu in the 43rd minute.

However, DeMbare replied almost instantly when Nhivi planted a header that beat goalkeeper Prosper Chigumba via the post from a set-up by another new signing, Evans Katema.

DeMbare coach Tonderai Ndiraya said he took a gamble when he threw into the fray all his four mid-season signings who also included Godknows Murwira and Gutu in a bid to add experience into his side.

“When you acquire players during the mid-season transfer window, those are supposed to be impact players, players who are supposed to come in and fix things quickly,’’ said Ndiraya.

“That’s what we had in our minds when we brought in those players. It’s not reasonable to buy players mid-season and sit them out.

“Previously, I bemoaned the quality in our team and clearly today you could all see that it’s a different Dynamos despite the low fitness levels of some of the players.

‘’I thought we competed very well and, with better fitness levels, we could have won the game.

“But, I think we were short in numbers, particularly going forward, because of those fitness issues. It’s better for them to play and get their fitness as we go on and hopefully in the next few weeks they will be at a better level.’’

The Derby appeared to turn back the hands of time to a period when it was the flagship football contest in the country.

Supporters from both camps had done their best to warm the stage with electric moves in the terraces before kick-off and during the game.

There was also an improvement in the attendances and the game was delayed by 15 minutes because of the long queues outside.

Chigumba almost fumbled a free-kick from Murwira into his own goal at the near post after six minutes, but the Green Machine rallied back to take control.

Winger Phineas Bamusi caused all sorts of problems on the wide flank and had defender Tinotenda Muringai booked after only 10 minutes as he struggled to deal with his blistering pace.

Ngodzo bossed the midfield and twice in the first half tested the DeMbare goalkeeper, Simba Chinani, with long-range efforts.

But Chinani, partly blinded by his wall, could not stop Ngodzo’s well-hit grounder, with just under two minutes before the half-time break.

But DeMbare refused to be subdued with a fine goal of their own, courtesy of Nhivi.

The second half started off slowly and DeMbare substitute Ngandu Mangala missed a good chance after a fine a cross by Murwira in 67th minute.

Action swung to the other end where Dynamos failed to clear their lines from a corner kick and Blessing Sarupinda’s cross found no takers as it rolled across the face of goal.

CAPS United had a penalty appeal turned down by the referee after Mangala handled the ball inside the box.

The referee waved play on and signalled that the ball flew towards the forward’s arm after taking a bounce and he could not be penalised for that.

“I thought it was a very good game, especially for those that were watching,’’ said CAPS United coach Lloyd Chitembwe.

“Congratulations to both sets of players, I thought they really applied themselves. They gave the fans what they always want.

“The hunger was there. It meant so much for them and from that perspective I am very happy.

“I thought my team gave a very good performance. Our build-ups in the first half were precise and our ball retention was very good.

“A lot of things about our game today were very good save for the fact that we could not get a winner.’’

Makepekepe remain in third place with 27 points while Dynamos are still trapped mid-table with 20 points after 15 games.

New Zealand beat Australia by one goal in final

Tuku concert lives up to billing