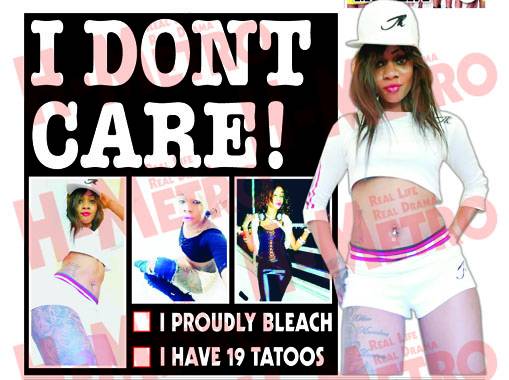 She is also proud of having changed her name and bleached her skin.

The 31-year-old grabbed the headlines when it was raised she was seeing Soul Jah Love.

H-Metro’s Latwell Nyangu (LN) caught up with the dancehall queen.

L N: How has controversy been part of your game plan?

DP: Yes I know I am controversial because I stand up for myself and my brand.

You see dancehall has always been a male dominated industry whereby if they see a brainy woman trying to rise, they will crush her dream.

Show me which woman have you ever heard of who made it far in dancehall?

Is it because we don’t have females that do dancehall or it’s because some people crush their dreams before they go far and then they just quit.

I have been there before.

I once left dancehall for two years but later came back to my senses where I told myself my brand is like my baby.

My brand is my baby and I wake up, sleep, eat and drink my brand.

DP: Yes I changed my skin colour and I announced to my fans before I did so I am not hiding that part of me.

It’s all about what makes you happy.

Michael Jackson was a black man who died white is it not?

There is a song by TLC called Unpretty which speaks about changing your looks if you don’t like them.

LN: Your body is tattooed, why?

DP: Tattooing is a very addictive habit, once you start with one tattoo you end up with more because each time you feel like increasing them.

I have been doing tattoos since 2009 and I now have a total of 19 all put together to make one giant tattoo.

LN: Are they proper for women?

DP: With me it’s my own designs, it’s basically my whole life story that I engraved onto my skin.

Kana shungu, they started calling me names even way before the tattoos it’s human nature even if you cut your hair and wear long dresses they will still do name calling.

I just can’t stop myself from doing what makes me happy because I want people to like me.

Never, I do what I love whenever; who is going to talk does not affect my happiness.

People are good at talking only but in reality when sh*t hits the fence, you are all alone with your problems.

Culture taught so many things that are now making us live miserable lives but I choose to differ.

DP: Not complaining much I thank God but I would love to settle back home and be useful to my own people because that’s where I belong.

LN: Women outside there have been deemed vulnerable and promiscuous, what’s your reaction?

DP: I don’t know about that hangu.

I have never done it myself but you may never know just that I don’t hang with females mostly ndotamba nemafesi so what women do handingazozive but most I know vanoshanda as waitresses or chefs.

DP: I can sing, dance and I can be a comedian because I am so intelligent and hilarious but I like challenges.

I have not seen a woman who can control a big empire pasina help yemurume, so it’s all about the challenge that comes with what I do.

I like picking up talent from scratch and focusing on it till I see them up there where they belong then I feel good about myself. And also seeing how our country could not offer enough employment for all of us we had to create employment of all levels in this.

L N: It is said only a few women can rise without exchange of sex?

DP: I have never had to sleep with anyone to be on top, zvakafumuka and I have worked hard for everything I have, ndichidhiswa nevanhu for years but I never stopped. Ukatouya kwandiri and you start showing interest I usually block you coz handidi kujairirwa kusvika ma levels iwawo.

I believe women can just make it by themselves given a chance.

And I actually wish all women could just come together and stop competing with each other in this game so they could win this battle of stigma against women in music, manje women I surrender.

L N: They say women in this genre are of loose morals?

DP: I don’t believe that they are loose but I think generally speaking like I said it is a very tough industry, you hardly ever make it pasina help from men who already are on top in the game so usually they just do the sex exchanges for fame or favours maonerowo angu.

L N: How is life in the spotlight for a woman?

DP: It is a gift and a curse at the same time.

You hardly ever meet a man who understands that you have a fan base that loves you and that you have to show love to all the times.

Drama and limelight goes hand in hand, people are always in your business with some spreading lies about you when they don’t even know you. So generally all I can say it’s not easy to be on the spotlight, it needs someone with a strong heart and have I don’t care attitude. Men always approach you with that ‘she is loose’ type of attitude. Zvoda kushinga, ziva zvaurikuda nechinangwa chako mugame.

L N: Would you say men have tried their luck on you and any figures maybe an approximate?

DP: I am way too boyish, I think they do try but I never get them because ndenge ndichingoti tikujoka pachimafia (laughing), I have never met anyone who has directly asked me out except for artistes doing songs about me like Guzu Kangarue on track called Wakanaka waka bleacher.

Rudeboi Duse track called Weh she want where he sings about taking Dope Queen away from everyone and all the drama and giving her everything and Soul Jah Love on track called Simudza Gumbo and speaking about my tattooed leg and praising it.

I take it more as endorsing me and my brand than showing interest though fans usually tend to think otherwise vakanzwa ma songs acho but to me it’s more like these artists recognise what I do and they are just saying their shout outs and encouraging me to keep going on we see you.

L N: Does it mean you scare away potential men?

DP: Drama follows me zvinotyisa and I tend to draw so much attention everywhere so maybe they just stay away because they are the ‘private type’ but with me there is no privacy ma1.

There are binoculars 24/7 since anyone seen in the picture with me atova kutsvagwa who is he and what’s the connection so pakaipa, what I can say is I have a crazy following.

L N: Are you a drama queen?

LN: What has been your most controversial moment?

DP: Back in 2016 when Beverly Sibanda asked me to book venues for her and I got her three and set up everything only to show up lying that I was unprofessional when she was the one who never picked up her phone.

Not knowing if she did that purposely to embarrass me as a promoter or something, we are still not in good books because she even got me fired at the venue I was working then.

LN: And your relationship with Bev, is so bad that you can’t work together?

DP: I personally would never work with her again.

I think she is a little bit crazy and annoying as well as unpredictable.

So I can’t honestly and most people I know that have worked with her complain about her drama too.

LN: What is your main focus?

DP: I am an entrepreneur, music promoter, digital marketer for music, clothing lines, music videos and modelling as well.

DP: I grew up with a passion for music, I used to sing from primary school to high school, so music is something I grew up in.

My mother used to love music as well. She sang at the church choir.

So at one point in my life at a young age of 18 I was founded by a big sound System called Maddhouse International Sound and groomed me for a few years before I started my own music company LadyTee Entertainment in 2010.

LN: Are you taken and what character defines you?

DP: I am currently in a relationship but not married and have never been married.

Agony of a young music producer!