‘He was an abusive man’

A Chinhoyi University of Technology student was grisly murdered by her suspected boyfriend after an altercation on June 30. 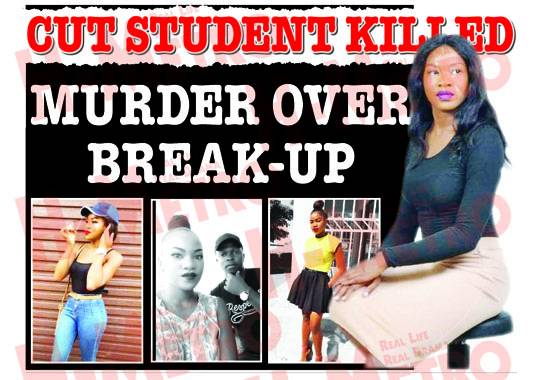 The student, Angela Dapi, 21, a third year Fashion and Design student, was found dead at a local hotel while her suspected killer boyfriend Richard Nenhowe was also lying bleeding after attempting to kill himself.

The accused is admitted at Parirenyatwa Group of Hospitals under police guard where he is not able to speak.

Angela was buried on Saturday at Paradise cemetery in Marondera.

The deceased’s father Ido Dapi said a young life had been lost unnecessarily and they were devastated as a family.

“We are waiting for investigations to reveal what actually transpired.”

“(There is) So much abuse going on in these young relationships; they don’t speak. Angie is gone but let her be the last girl to go through such an ordeal.

“Let this be an example and save the next girl,” Dapi said.

A close friend to the deceased who spoke on condition of anonymity said Nenhowe was always abusive.

“I remembered tiri ma 1.1 (First Year, First Semester) she used to complain that he was abusive. He would beat her because of his insecurities.

“At some point she wanted to leave him and she started seeing one of our classmates during vacation and as soon as we opened they broke up that was 1.2 (First Year, Second Semester).

“I tried to ask her but she just gave silly comments but I heard from one of our classmates that they broke up because she was trying to keep him safe,” the classmate said.

The classmate said it was now making sense why Angie wanted to leave the abusive relationship.

“Angie wanted to leave this guy a long time ago but she was trapped; it’s not making any sense. I feel like I failed her. I could have paid more attention and reported him right away but instead we comforted her,” she said.

A close source to the mishap said:

“Angela and her boyfriend broke up a month ago because Nenhowe had cheated on her and he refused to accept being dumped.

“He travelled from a mine in Zvishavane where he worked to Harare on Sunday to try and fix their relationship that’s when they met at Elizabeth Hotel and he then choked her when she entered the hotel.

“Nenhowe then sent a text to his friend stating that he had killed his girlfriend and when the police found out Nenhowe was bleeding profusely after he attempted to kill himself.”

She was buried in Marondera on Saturday. H-Metro