Egypt’s former presidential candidate Abdul Moneim Aboul Fotouh has suffered two heart attacks in prison, his son said, adding his father may die there because of the harsh conditions under which he is held. 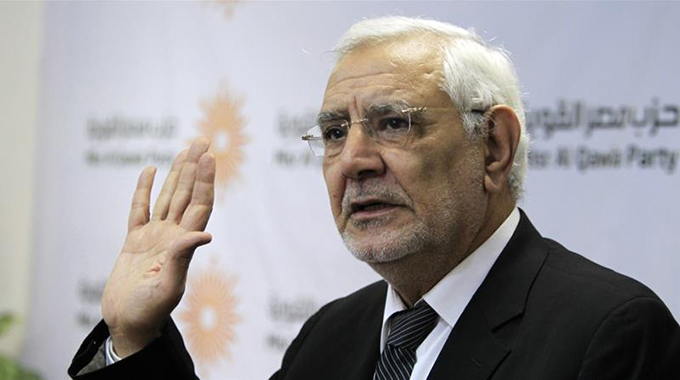 Aboul Fotouh’s son, Ahmed, wrote on Facebook on Saturday his father, who is a leading opposition figure, may succumb to the “deliberate” abuse in Cairo’s Torah prison “at any time”.

A former member of the Muslim Brotherhood and leader of the centrist Strong Egypt Party, Aboul Fotouh ran as an independent candidate in the 2012 presidential elections, gaining nearly a fifth of the vote in the first round.

Aboul Fotouh was detained in February 2018, ahead of President Abdel Fattah el-Sisi’s re-election, on charges of being part of a banned group, unspecified by Egypt’s prosecution, but widely believed to be the Brotherhood. He is also being accused of spreading false news.

“Today, while we were waiting to visit him, he had a heart attack,” Ahmed Aboul Fotouh said on Facebook.

“His condition improved after receiving treatment and we visited him. We then learnt he had a heart attack yesterday night, too.”

“Two heart attacks within less than 24 hours! And the reason is the inhumane prison conditions and deliberate abuse,” he added.

The news comes two weeks after the death of Egyptian President Mohamed Morsi, who collapsed while attending his trial in Cairo.

Morsi fell unconscious inside the courtroom, and state television later said he died of a heart attack.

Aboul Fotouh’s family members have repeatedly complained about the circumstances of the opposition figure’s detention, saying his solitary confinement serves no other purpose than to physically and mentally abuse him. – Al Jazeea

Egypt train crash driver was ‘not at the controls’: prosecutor