Mohamed Salah made one and scored one as hosts Egypt beat DR Congo 2-0 to move into the last 16 of the Africa Cup of Nations. 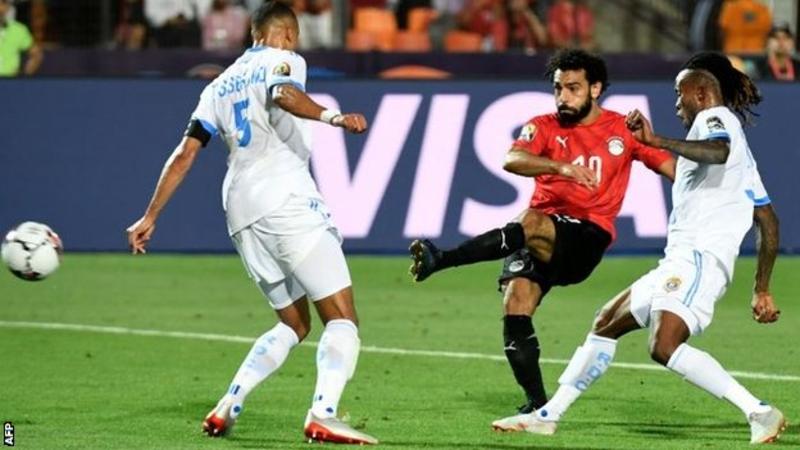 Egypt went ahead when Salah’s cross was met by Aston Villa’s Ahmed Elmohamady, who finished at the second attempt.

Liverpool forward Salah then added a second with a powerful strike when surrounded by two DR Congo players after a fine run from Trezeguet.

Seven-time winners Egypt join Nigeria in the last 16 of the competition.

The Super Eagles beat Guinea 1-0 in the opening match on Wednesday to become the first nation into the knockout phase.

Aboubakar scores again as Cameroon joined by Burkina Faso in…

Egypt, who last won the tournament in 2010 and lost in the 2017 final, secured their second win in two matches to move on to six points and guarantee a top-two finish in Group A.

DR Congo hit the woodwork twice, through Marcel Tisserand when it was goalless and then again with a header from Jonathan Bolingi when Egypt were ahead 1-0.

Yannick Bolasie, who is an Everton player but spent last season on loan at Aston Villa and then at Anderlecht, nearly pulled a goal back late on but curled a free-kick just wide.

This was DR Congo’s second defeat in two games and they have to beat Zimbabwe on Sunday and hope they claim one of the four spots available to teams finishing third in their group.

Egypt had begun their campaign with a 1-0 win over Zimbabwe and will go through as group winners if they avoid defeat against second-placed Uganda on Sunday. BBC Sports