For several people, the first thing that comes to mind when coming face to face with strange objects, in one’s yard, is that it can be related to witchcraft. 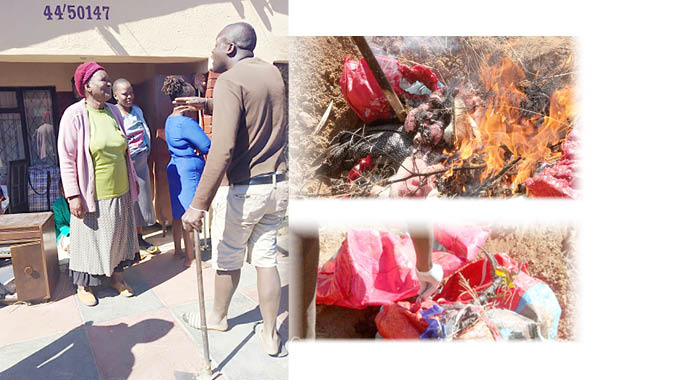 This is exactly what happened to one family from Bulawayo’s Mpopoma suburb who got the shock of their lives when they found strange objects suspected to be witchcraft paraphernalia dumped inside their yard.

The incident which sent shockwaves throughout the suburb and left the family confused happened on Tuesday morning.

The suspected underworld things comprising a new blanket covering a live guinea fowl with beads around its neck and whose legs were tied together with a red piece of red cloth and a dry stick smeared with blood were dumped at the corner of their yard.

When the B-Metro news crew arrived hordes of stunned residents had thronged the house to catch a glimpse of the strange items.

Narrating the ordeal, the owner of the house Philda Sibanda (72), said the strange items had given them the shock of their lives.

“We have no idea where the strange items came from. My grandchildren who wake up early while preparing to go to school were the ones who discovered the strange items dumped at the corner of the yard. We suspected that the items were left by someone who wanted to put a spell on our family,” a shocked Sibanda said.

She, however, allayed fears of being bewitched saying she was putting everything in the hands of God.

“As a family we are not scared as we have only one shelter to run to: God. With God everything is possible, and He can stop evil people from achieving their goals,” she said, adding that she failed to understand why some people would want to see her family suffer.

Sibanda said before the incident, the family had been experiencing strange things in their house with one of the family members having dreamt being bitten by snakes.

“A day before the incident we experienced some strange things in the house with some members complaining that they had a dream in which they were being bitten by snakes.

“We phoned our pastor who came and prayed for us and assured us that anything that is going to visit us as a family will be overpowered. I have heard of these evil things but never thought I would experience them myself,” explained Sibanda.

But the family left nothing to chance as they phoned one of their church, Transformation Centre International Ministries’ senior pastors, Jerry Mutongwizo who immediately came together with some church members and conducted prayers before he took the strange items to a nearby bush and burnt them.

Pastor Mutongwizo echoed Sibanda’s words saying before the incident the family complained of weird things happening in their house.

“After those complaints I visited their house and conducted prayers and was surprised when the family called me early in the morning saying they had discovered some strange items dumped in their yard,” said Pastor Mutongwizo.

Mutongwizo said within minutes, he came to the house together with some church members and conducted prayers before he took the items to a nearby bush and burnt them, much to the shock of residents who had gathered to witness the strange objects.

“I have never seen anything like this in my life. I just heard of incidents like this from the media and never thought it would one day come face to face with me,” said one resident who identified herself as Mrs Moyo.

An elderly resident Mthulisi Ncube said a person could have tried to put a spell on the family, only to find that they had strong muthi or prayers. B-Metro