A Twenty four year old Gweru based young inventor has come up with a prototype design of a generator that uses water to generate electricity.

Tawananyasha Tinotenda Chishamba, was motivated to design the generator by the level of load shedding in Zimbabwe and some areas in South Africa.

“This is a prototype of a power station I made after I have seen load shedding affecting our country and neighbouring countries.

“I can come up with a solution if resources permit. I initially started designing this power station in 2007 but due to lack of finances I failed to make the final product.

“I was able to do the prototype this year where I managed to pick some scrap metal and came up with this design.”

Chishamba said he did his education in South Africa.

“In 2014 I was doing my grade 12 at Vhembe FET College in Limpopo doing Fitting and Turning before I dropped out last year.

“I dropped because I was not good in theory but practical.

“This PowerStation is water powered, it does not use diesel, petrol and any other fuel.

“You don’t have to go to the dam for hydro PowerStation.”

“It can be started anywhere even in town, so on this prototype I am using 380 to 440 volts and it uses 60 litres of water.

“It doesn’t harm the environment,” he said. 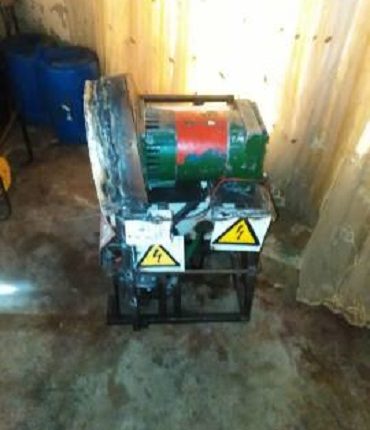 Chishamba said he is appealing for money and resources to come up with a final product.

“I want money from investors so that I can build a power station of 1500MW.

“I always think out of the box and most of the time when I’m angry I control my anger through doing the impossible to become possible.

“There are many people who are inventing things from scratch and it’s possible with me.

“I am also a motor mechanic.”