Two goals in the last nine minutes gave Bulawayo Chiefs their first set of points for the season as they burst the Dynamos bubble in a Castle Lager Premiership match at Barbourfields yesterday. 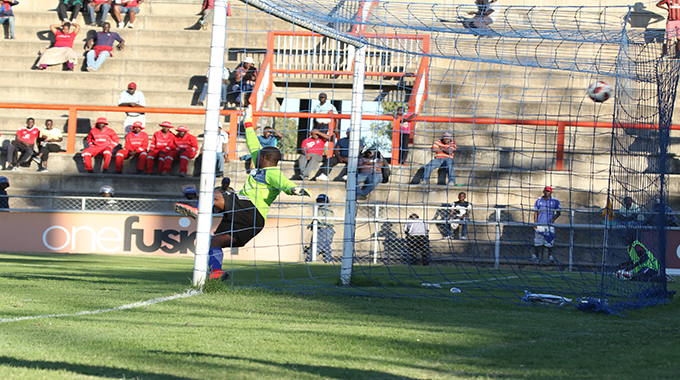 The result means that Dynamos are yet to record a win at Barbourfields this season, with two losses and a draw in three visits to the City of Kings.

A penalty by Arthur Musiyiwa was complemented by a strike from Michael Bhebhe as the Premiership’s basement club finally found a way to win and cheer their spirits.

Tenacity and persistence ensured Chiefs kept up the search for the back of the net and they took advantage of poor defending by the visitors.

Dynamos had a decent first half as they played with purpose dominating exchanges but opportunities were few and far between with Chiefs also coming up with their own chances but the match went into the breather goalless.

The second half saw both sides making penetrating moves with Viali Tadzoka sending the ball over the bar from an acute angle over the bar in the 49th minute and two minutes later it was Chiefs who came up with an attempt when Musiyiwa crossed the ball into the box on the right flank but Bhebhe’s shot went wide.

As the match approached the final 10 minutes, seemingly headed for a draw, Chiefs’ forays into the box were rewarded when substitute Herve Mbega handled inside the box and referee, Bonamali Bwanali pointed to the spot.

Musiyiwa stepped up and sent Simbarashe Chinani the wrong way in the 81st minute.

The goal seemed to spur Chiefs on and they piled more pressure on DeMbare who seemed to crumble and the home side was rewarded with another goal in the 87th minute when Farai Matare found an unmarked Bhebhe whose volley ended the match as a contest and sent the Chiefs fans into wild celebrations.

Chiefs’ coach, Farai Tawachera said it was a matter of time before his side came up with a positive result as they had been steadily improving and also managed to capitalise on Dynamos’ weaknesses.

“We have been playing well for the past four games but I think we were unfortunate not to be finding the back of the net. “We had watched Dynamos before and we knew their strengths and weaknesses and we planned well. The three points give us some confidence as we head to Triangle and once we start believing I think anything is possible,” he said.

Dynamos coach, Tonderai Ndiraya said the match was a reality check for them and they have a lot of hard work to do to turnaround their fortunes.

“We are still in the reconstruction phase but I think the fact we did well in the past three games gave us confidence coming here and we thought we might get a result here but we knew it won’t be an easy match and Chiefs played well.

“I think all round we did not play well but our defending was poor and we paid the price as Chiefs exploited the gaps that we opened up,” Ndiraya said.

The win by Chiefs leaves Highlanders as the only team yet to record victory in the Premiership this season.

Meanwhile, Masimba Mambare shrugged off a late ankle injury to score Black Rhino’s winner and earning praise from his coach Herbert Maruwa, who called for consistency from his boys after edging Hwange 2-1 at the National Sports Stadium yesterday.

Mambare’s 90th minute strike ensured the army side got their fourth win after Moses Demera had equalised for the hosts, who found themselves trailing after 12 minutes when burly forward Dingane Maphosa scored for Hwange.

The visitors started the match with verve and got a 12th minute lead through Maphosa who finished off a rebound after Rhinos’ goalkeeper Blessing Mwandimutsira spilled the ball off Tafara Chese’s powerful strike from outside the box.

Despite their keeper’s mistake, Black Rhinos stayed in the game and were duly rewarded when Demera scored in the 21st minute after he was played on by Wellington Taderera. Dingane hit the cross bar in the 37th minute with an attempted lob from inside the box.

Both teams were dangerous in attack with the visitors using the pace of Chese on the right side while Mambare was in fine form playing on the right flank.

Thirteen minutes in the second half Mwandimutsira was substituted for Ashely Reyners after picking up a quad injury. The search for the winning goal continued with Hwange’s Eddie Nkhulungo shooting straight at the keeper while Rhinos’ second half substitutes Vincent Mhandu and Francisco Zekumbawira came close to getting a goal each.

It was however, left for Mambare to be the man as he finished off from close range in the dying minutes of the encounter. Taderera’s had started the move beating his marker on the left side before laying it on to Zekumbawira whose effort bounced off defenders to fall into Mambare’s path. Sunday News