EFF leader Julius Malema has responded to comments by Trevor Noah, saying the comedian “must not be used”. 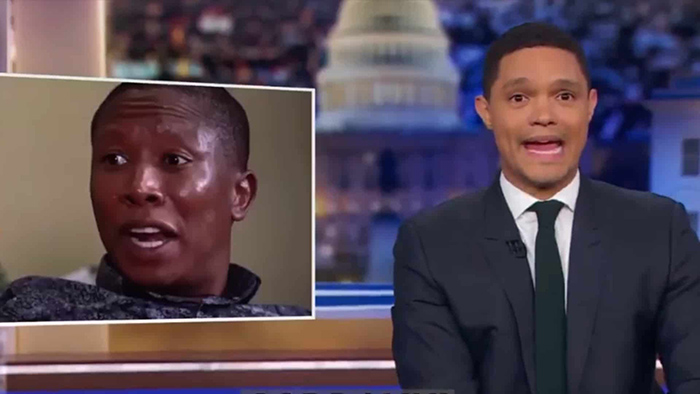 Malema was speaking during an EFF media briefing on Thursday. He was responding to a clip on The Daily Show in which Noah compared Malema to US president Donald Trump.

“We love Trevor Noah. We will continue to laugh at his jokes, he is our brother, he is doing well. He is entitled to his opinions, he must refuse to be used. Trevor Noah can say anything he wants about me. So many things were said about me. He doesn’t know me.”

The clip was removed from The Daily Show’s social media accounts, but continues to be shared on social media.

Twitter was divided on Noah’s comments, with some saying he was promoting false stereotypes, while others said he was a comedian and also poked fun at other politicians, including former president Jacob Zuma.

I don't agree one bit with what the CIC is saying about #TrevorNoah, ke supporte Trevor nna??? I don't recognize Trevor as one of my own. Once you agree to be used by white supremacists we can never see eye to eye on anything. pic.twitter.com/sANe5gkMj1

#TrevorNoah spreading propaganda is So irresponsible.With great power comes great responsibility,he shud know beta ,So it’s just so disappointing because I was rooting for him. Thats #Strike1 n 2.

#EFFPresser Malema: People say things to keep their jobs, we had that during the apartheid era. It’s not a new thing.

Last November whilst in the US, people actually asked me about the white genocide happening in SA. Imagine! I obviously told them it’s a blatant lie that white people are selling for sympathy and God knows what! Trevor’s statement isn’t just another Julius Malema joke #TrevorNoah

Robert Marawa receives major support after being sacked by SuperSport