Early in the day, Wicknell posted his thoughts on the H-Metro Instagram page (hmetrozimpapers) on the front page story of Wednesday where V Candy denied dating Ginimbi.

Gwanda Solar Project to go full steam ahead as Minister…

He commented: “In my view knowing Genius to be the businessman and Mrs V Candy being a prominent DJ I really don’t think they are dating at all.

“However it can only be obvious that they are most probably having sex may be just 5 or 6 times a week which really doesn’t mean anything to two big names in the entertainment industry. 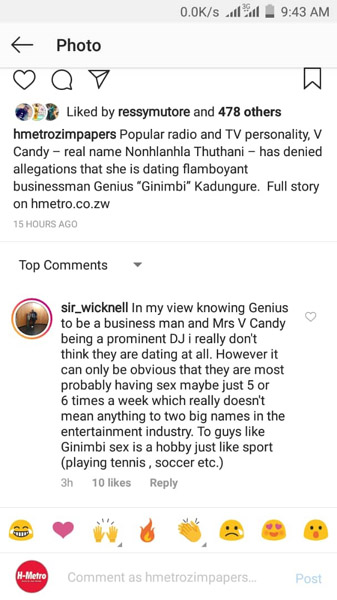 In an interview with H-Metro in the afternoon, Wicknell laughed off the comment saying it was only a joke.

“Kunakidzwa hangu but what do you expect?

“Murume nemukadzi can never be friends, we are black people not varungu and with our Zimbabwean mindset it’s not possible.

“Izvo ndezve varungu vanoita zvehushamwari, how would you take it if your wife is to say I am going for meeting with a male friend?

“But above all it nothing serious, it was just a joke,” he said.

Sir Wicknell went on to say he did not hate either of them and neither did he have time to hate anyone.

“Me and Ginimbi are good, handina pressure naye, why would I hate him?

“Wicknell is a businessman and very much into social and entertainment circles.

“Is he trying to say that is what he does and those are his hobbies, talking from experience I guess?

“He should not speak on behalf of some of us, speak for yourself Wicknell.

“I found it very offensive, how does he join the bandwagon of naysayers.

“He may have his own personal differences with Ginimbi but to attack a whole woman in the process is very chauvinistic and sexist, such a stereotypical statement is disgusting,” she said. H Metro

SA elections: Mmusi Maimane not worried about his job despite poor election performance