“I was just sitting at the pastor’s corner in the dining hall at Solusi University with my friends when Vimbainashe entered the door; I saw beauty,” said Tapiwa Kuzowamunhu. 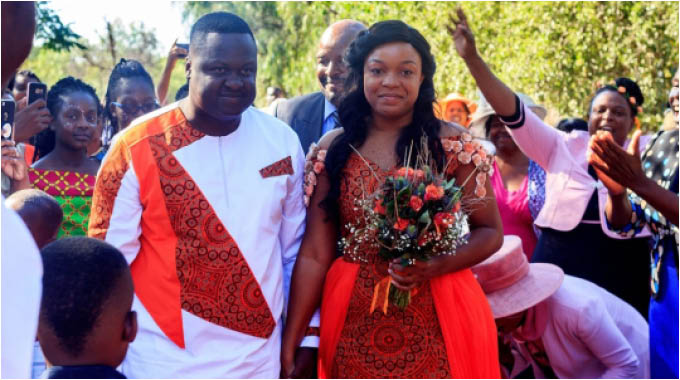 It was in September 2012 when Tapiwa was pursuing a Theology Degree while the woman who had just grabbed his attention Vimbainashe was studying towards an Agri-business degree at Solusi University.

Two days later they started texting each other and the love chemistry grew. Seeing her baptised convinced him that she was the best person to marry.

“After seeing her baptism in October 2012 I felt she was the best person to spend my life with. As a result I made a firm decision to propose love,” says Tapiwa.

While he was relaxing at his home he received a call from Vimbainashe.

“She was asking to take me out for lunch and I had to choose one of the top restaurants in the city,” says Tapiwa.

Why did she arrange for a lunch?

“I felt he was taking too long to tell me that he loved me and I wanted to create a perfect atmosphere for him to tell me. Unfortunately he did not say anything,” says Vimbainashe.

Tapiwa disclosed that he had to cut down on his personal budget and survived on a shoe-string budget for the wedding to become a reality.

“I survived on $150 per month and I moved from a house in the eastern suburbs to western suburbs. I used to eat bread with soft drinks. I also stopped using my car and used a school bus to travel to and from work,” he says.

They dated for five years.

“I organised Subaru cars from my friends and put personalised number plates inscribed ‘Marry me Vimbai’ and invited her to Busters Sports Club open ground, that is where I knelt down and asked her to marry me and she agreed,” says Tapiwa.

He paid the bride price on 26 April 2019 and their African wedding was on 28 April at a private house in Lockview plots.

What were the colours of their wedding attire?

“Orange and white were the colours of our wedding. We had 17 bridesmaids, seven groomsmen and eight flower girls,” she says.

The couple is thankful to their parents and friends for their unwavering support. B-metro

Man dumped by lover for sleeping with the ‘whole’ suburb