Ministers and their shadow counterparts will continue cross-party talks on Tuesday, Downing Street has said, as they try to break the Brexit deadlock. 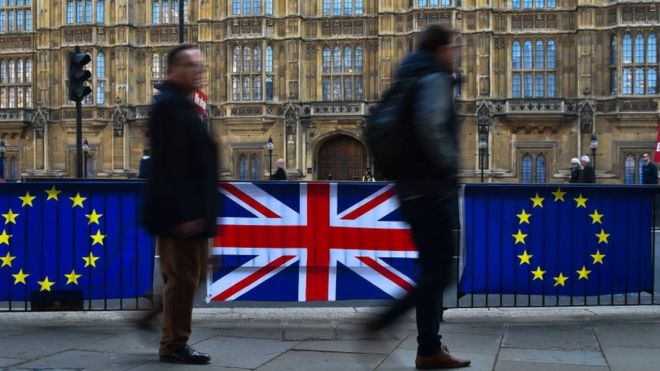 Sources indicated the PM had not accepted Labour’s customs union demand, but there was a move towards changing the non-binding political declaration.

Labour leader Jeremy Corbyn said there had been no change in the government’s “red lines”.

A Downing Street spokesman said the government was “committed to finding a way through” which requires both sides “to work at a pace”.

Jeremy Corbyn: ‘I will not lead Labour at next…

The UK is currently due to leave the EU at 23:00 BST on Friday. So far, MPs have rejected the withdrawal agreement Theresa May reached with other European leaders last year.

She is due to attend an emergency summit in Brussels on Wednesday, where EU leaders will expect to hear fresh plans aimed at ending the impasse in Parliament.

Ahead of this, Mrs May will hold talks with German Chancellor Angela Merkel and French President Emmanuel Macron in Berlin and Paris on Tuesday.

On Monday evening, Parliament passed a bill brought by Labour MP Yvette Cooper, which aims to force the prime minister to request a Brexit extension rather than leave the EU without a deal. However, the final decision on an extension lies with the EU.

The bill received Royal Assent from the Queen on Monday night and has become law.

Commons Leader Andrea Leadsom told MPs that if this happens on Monday evening, there will be a government motion on Tuesday asking the House to approve the PM’s request to the EU to delay Brexit until 30 June.

During the cross-party Downing Street talks, the government reportedly suggested offering Labour a guarantee that any deal they reached could not be undone, creating a “lock”. This would aim to ease Labour concerns that any promises could be unpicked by the next Conservative leader.

But BBC political editor Laura Kuenssberg said there was “deep concern” on the Labour side that any legal promise could be undone by further legislation.

However, the prime minister was warned by members of the 1922 committee of Conservative backbenchers that agreeing a customs union with the EU in Brexit talks would be “unacceptable”.

The MPs met Mrs May in Downing Street and it is understood they were more open to the idea of a customs arrangement, which would allow the UK to do its own trade deals.

Talks between Labour and the government began last week, with Mrs May saying only a cross-party pact would see MPs agree a deal in Parliament.

If no compromise can be reached between the parties, Mrs May has committed to putting a series of Brexit options to the Commons and being bound by the result.

Mr Corbyn said: “Talks have to mean a movement and so far there’s been no change in those red lines.”

The Labour leader said there were “many concerns” his party had over the political declaration – a plan for the future relationship with the EU – which it planned to put to the government in their discussions.

Meanwhile, the government has taken steps to ensure the UK can take part in European Parliament elections on 23 May.

A Day of Poll Order has been laid in Parliament, which is required by law for the vote to take place.

The Cabinet Office said it was taking responsible steps, but the move did not make participation in the elections inevitable.

But he said that, if the UK left the EU without a deal, “we will not discuss anything with the UK until there is an agreement for Ireland and Northern Ireland, as well as for citizens’ rights and for the financial settlement”.

The EU would “stand fully behind Ireland” regardless of what happens with Brexit, he added.

Mr Varadkar said he was open to extending the Brexit deadline to allow discussions to “continue their course”.

Key dates in the week ahead

Jeremy Corbyn: ‘I will not lead Labour at next election’