Cut, and thats a wrap. . . Actress dumped over kiss scene

A local actress was abandoned by her boyfriend after he saw pictures of her kissing another man on an upcoming soapie trailer. 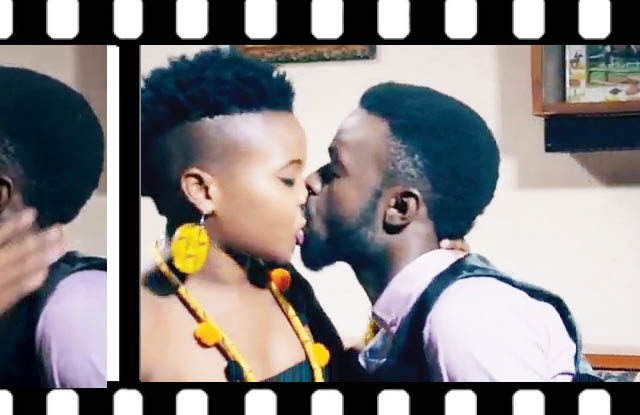 It is reported that Kelvin Jenkins was too jealous when he saw his girlfriend Farai Magada who plays the role of a black widow in an upcoming soapie titled Hotel Khumalo passionately kissing Thamsanqa Moyo whose stage name is Jack.

“Probably he did not know that this was not going to be a mere peck but a deep kiss. He has always been supportive of Magada. After viewing the trailer he just didn’t want to talk to her because he blamed her for making him a laughing stock,” said a source close to this issue.

When B-Metro got hold of Magada she opened up.

I wanted to be a lawyer – Tamy Moyo

“Yes, we broke up but it wasn’t easy because I expected him to understand that this is what I will be expected to do sometimes as an actress. When I kissed Moyo it was just for acting, besides he is way younger than me so there’s no way I can date him,” said Magada.

Quick Adsense WordPress Plugin: http://quicksense.net/ –She added: “My dream is to establish myself in the film industry so I will continue pushing until I achieve great things. God blesses everybody with talent, most people cannot act and when you have the zeal and you can do something, you have to use it well.”

Moyo was also in support of Magada.

“If I were to feel guilty about Magada’s situation I would not be fit for the profession that I am in,” he said.

However, sources revealed that Magada had been stressed because of her strained relationship.

“She couldn’t eat, neither could she sleep after she broke up with Jenkins. We have been worried about her health. We are still shocked at Jenkins’ immaturity. Kissing a guy on screen should not amount to ending one’s relationship,” said a source who spoke on condition of anonymity.

“News really travels fast. I don’t trust you so I won’t comment,” he said. B-Metro.

Mnangagwa opens up on past

I wanted to be a lawyer – Tamy Moyo

Tamy off to conquer Europe