5 Skippas, DSTV, the beer and why we like it for Platinum 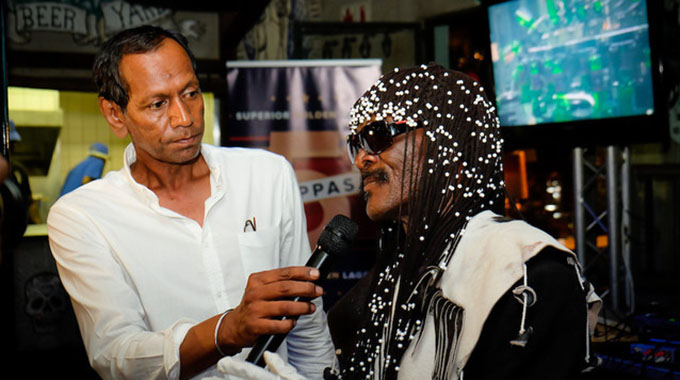 In a world usually hostile to those not fluent in English, he has somehow found a way to transform himself into a celebrity, an unlikely musician and a brand ambassador largely because of his serious challenges in speaking the Queen’s language.

He became such an overnight sensation a South African lager beer, ‘’5 Skippers,’’ was even launched in his name, he was invited to grace his favourite football club’s end-of-season awards ceremony as a special guest and a number of songs have been released based on his strange lyrics.

And, today, he even features on a promotional advert for DStv where he joins a heavyweight cast of some of South Africa’s finest actors, football stars and analysts.

Well, Sphamandla Goodenough Sithole, is coming to the City of Kings this week.

And Bulawayo should brace itself for quite a show when it hosts this eccentric man, who dresses as a woman when he goes to the stadium to cheer his favourite football club, and who describes himself as Orlando Pirates’ number one fan.

The Buccaneers, who became the first Southern African club to be crowned champions of Africa in 1995, are coming to town for a Champions League showdown against FC Platinum at Barbourfields on Saturday.

And, when Pirates are in town, Sithole is usually part of the travelling party.

The 48-year-old is easy to pick out even in a crowd, especially in a stadium.

He always wears his striking black-and-white head gear, black-and-white dress and is fiercely loyal to his Buccaneers, a team he started supporting as a 12-year-old, despite being taken to football matches as a kid by an uncle who supported Kaizer Chiefs.

Sithole has become a household name in South Africa today, just like the football stars he loves, and transformed himself into a musician while his strange lyrics, plucked from a television interview that thrust him into the spotlight, have found their way into songs released by rapper Cassper Nyovest and Bulawayo’s DJ Cooperman.

His extraordinary rise to become a celebrity fan is a measure of how South Africans can convert anything, including those who would be ridiculed or shamed elsewhere — be it in their struggles with English or otherwise — into commercial success stories.

‘’I like it for DStv,’’ Sithole says in that Multichoice promotional video.

The phrase was plucked from the infamous television interview, after he won a Fan of the Day award, which he conducted with the then SABC football presenter, Deshi Bhaktawer, in 2011, which we publish again here:

Deshi: Okay Goodenough, just quickly tell me when you go to the shop to buy these clothing or this clothing, what do they say?

The interview went viral, and as of yesterday, had clocked more than 320 524 views on YouTube, while the phrase, ‘’I like it for the Pirates,’’ began trending around the region.

But rather than reduce him into an object who would be ridiculed, for his struggles with the English language, the South Africans found immense commercial value in him.

And award-winning rapper Nyovest produced a song with the lyrics plucked from that interview, and so did Bulawayo’s DJ Cooperman, while Sithole has also produced an album and a single related to that event.

Bhaktawer, who was once a Pirates goalkeeper during his days as a professional footballer, went even better and produced a lager beer, named ‘’5 Skippas,’’ which has since been selling well in South Africa.

‘’There’s a new golden lager making the bar rounds in town — and it’s challenging everything about the mass market beer category,’’ Kick-Off announced in November 2016.

‘’A beer made by South Africans for South Africans, it’s difficult to think of 5 Skippas Superior Golden Lager as the new beer on the block, when it’s already crept its way into the hearts of local beer drinkers, finding the magic to make the all-important leap from unknown brand to beer of choice.

‘’The product of the now legendary interview between former Orlando Pirates goalkeeper, turned TV presenter, turned entrepreneur Deshi Bhaktawer, and enamoured fan-turned-spokesperson Good Enough Sithole, where the term ‘5 Skippas’ was first coined, the beer is a smooth and refreshing reflection of our local spirit and love for sport.

‘’As a challenger to the mass market, the 5 Skippas brand counts values such as unity, authenticity, and locality as the main drivers behind its beer, aiming to weave a fabric between the different cultures in South Africa regardless of gender, age, culture, or ethnicity.’’

Sithole is the principal brand ambassador of the beer even though, for all his eccentricity at the football matches, he has never tasted alcohol in the 48 years of his life.

He likes it for his Pirates, for the beer with his nickname and DStv but, of course, we like it for our Platinum. After all, Johnnie Walker Platinum, which cost an average R1 149.00 a bottle in South Africa is worth far much more than five crates of 24 ‘’5 Skippers,’’ lager beers.

Either way, we like it for the Champions League and our City of Kings. The Herald