Carlo Ancelotti: Napoli ‘will stop playing’ if a player is subjected to racist chants 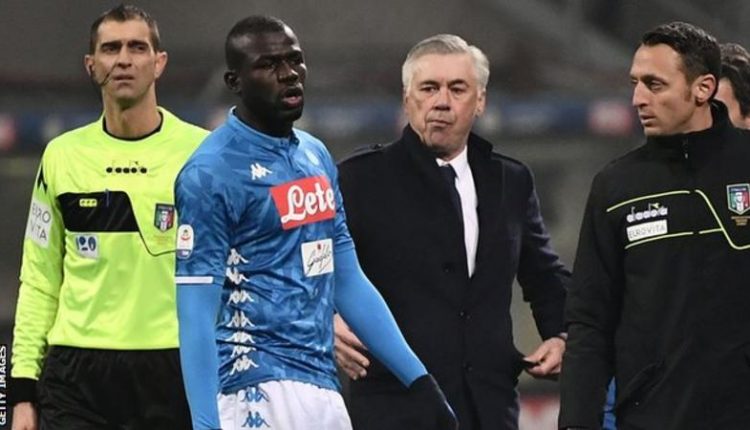 Napoli boss Carlo Ancelotti said his team asked three times for their match at Inter Milan to be suspended because of alleged racist chanting, before a last-minute goal gave Inter victory.

Ancelotti claimed Kalidou Koulibaly was targeted at the San Siro, where the Senegal defender was sent off.

“The next time we’ll stop playing, even if we lose the match,” Ancelotti said.

“What happened today is not good not only for us but also for Italian football as a whole,” the former Chelsea boss added.

Napoli president vows not to sign any African players…

“I’m very sorry about what happened to Koulibaly. The boy was on edge, he is an educated footballer who was targeted. Despite our requests the match was not interrupted. I’m unhappy because three times we asked for the match to be suspended.”

Koulibaly, 27, was sent off after receiving two yellow cards in a matter of seconds in the 80th minute. The first was for a foul on Matteo Politano, the second was for sarcastically applauding the referee’s decision.

After the match he posted on Twitter: “I’m sorry about the defeat and especially to have let my brothers down.

“But I’m proud of the colour of my skin. To be French, Senegalese, Neapolitan, and a man.”

The mayor of Milan, Guiseppe Sala, apologised to Koulibaly on his Facebook page.

“It was a shameful act against a respected athlete, who proudly bears the colour of his skin, and also, to a lesser degree, against the many people who go to the stadium to support their team and be with their friends.”

Napoli’s 27-year-old Algerian left-back Faouzi Ghoulam posted a message of support. “It was painful to hear racist chants directed at my brother,” his Twitter post read.

Insigne was shown a straight red after appearing to gesture towards the referee in the 94th minute.

Napoli’s defeat means defending champions and leaders Juventus, who have won the past seven Italian league titles, are now nine points clear of the second-placed side.

Mauro Icardi hit the Napoli crossbar with the game’s very first touch, when he shot straight from kick-off.

But Inter, who remain in third place, had to wait until injury time before Martinez found the net with his first attempt on goal, eight minutes after coming on as a substitute.

Earlier on Saturday, as Serie A matches were held for the first time on 26 December, Cristiano Ronaldo scored an equaliser for 10-men Juve as they salvaged a 2-2 draw at Atalanta.