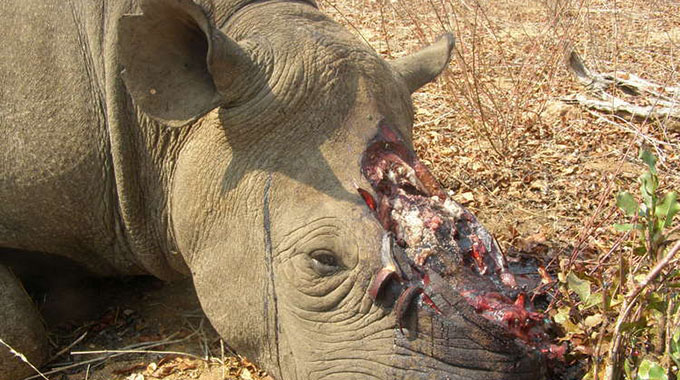 Two poachers have been jailed 10 years each for hunting rhinoceroses in Bubye Valley Conservancy under Beitbridge District.

Celestino Shate (35) of Bulawayo and Faso Moyo (42) of Victoria Falls denied the charges when their trial opened before Mr Langton Mukwengi on charges of contravening a section of the Parks and Wildlife Act, but were convicted on overwhelming evidence.

Charges against their other accomplice Godfrey Makechemu of Gokwe were withdrawn at the close of the State’s case for lack of incriminating evidence.

Prosecuting, Mr Manyonga Kuvarega told the court that on August 28 this year, the duo went to Bubye Valley Conservancy armed with .375 mm rifle in the company of Makechemu to hunt and kill rhinos.

Bushiri distances church after ex-pastor is arrested for…

He said the accused persons also carried with them foodstuffs in two satchel to consume during their “adventure”.

The court heard that their luck ran out when one game ranger at the conservancy observed their spoor entering the conservancy, who in turn informed his superiors.

They then organised a team of rangers to trek the spoor of the accused persons who were also following a fresh spoor of a rhino. The rangers trekked the trio for three hours and later caught up with them.

Mr Kuvarega said when the rangers spotted the armed poachers, they fired three warning shots and ordered them to surrender.

He said the poachers ran away, with the rangers in pursuit. The rangers, he said, managed to apprehend Shate and Moyo.

Before his arrest, Shate, who had been holding a rifle, gave it to Makechemu, who fled from the scene. The matter was reported to the police, who arrested him two days later at his home in Gokwe.

Khumalo was arrested on November 11 when he was hunting with three others who are still at large.

The accused person was armed with a Bruno.375 rifle fixed with telescope device and a silencer.

Three black satchels, ammunition and the rifle were recovered from Khumalo.

Incidents of poaching of rhinos and other wildlife animals are rife in conservancies in Beitbridge District.

In January last year, two poachers were shot and killed during an exchange of fire with a team of Zimbabwe Parks and Wildlife Management Authority rangers working together with the police in Hwange National Park.

The pair was from Nkayi and they were shot during contact with the police and the Zimparks rangers.

Later in April (2017), police arrested a 41-year-old suspected poacher after he shot and killed a game ranger at Nottingham Estate some 40km south-west of Beitbridge Town. The Herald