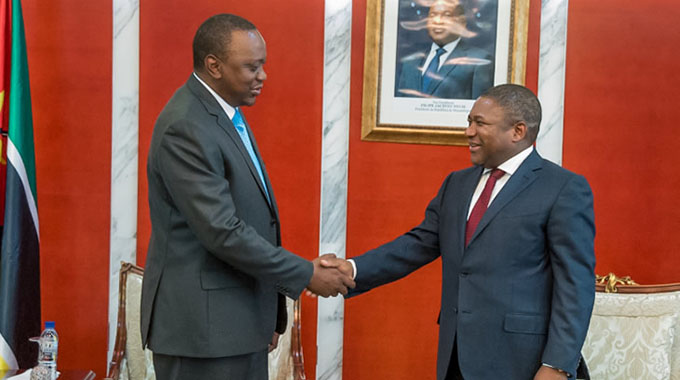 Kenya and Mozambique on Wednesday signed a visa waiver framework aimed at boosting trade and free movement of people between the two countries.

The agreement will also boost the two countries’ cultural exchanges, said Kenyan President Uhuru Kenyatta who witnessed the signing of the deal in Nairobi with his Mozambican counterpart Filipe Jacinto Nyusi.

President Nyusi welcomed the signing of the visa waiver, saying it was a move in the right direction in bolstering the cooperation between the two countries.

He said their discussions mainly focused on economic and other areas of mutual cooperation including tourism and the energy sector in which Kenya has excelled.

“We discussed important issues of our economy and finance as well as issues of avoiding double taxation so as to facilitate trade for our business people and for the flow of business between our two countries,” PresidentNyusi said, according to a statement issued by President Kenyatta’s office after the joint meeting in Nairobi.

No sex until I win elections: Raila Odinga appeals to…

Drivers queue for hours as Kenya reels from fuel shortage

He reaffirmed his government’s commitment to work towards enhancing cooperation and bilateral relations with Kenya.

President Nyusi is in Kenya for a reciprocal state visit that will see him attend the opening of the world’s first Sustainable Blue Economy Conference that is co-hosted by Kenya, Japan and Canada in Nairobi next week.

President Kenyatta noted the tremendous progress made in the growth of gas, coal and oil exploration in Mozambique, saying Kenya seeks to learn from Mozambique’s best practices including transfer of technology as it embarks on developing its own extractive industry.

He disclosed that one of the proposals that Kenya is considering is the importation of liquefied gas and coal from Mozambique starting next year through a government-to-government agreement.

He said Kenya is also considering opportunities in aviation with a focus on technical training and the establishment of an aviation training organisation.

“As a nation, we have the capacity to offer the requisite technical assistance in this field,” he added.

As two ocean-facing countries, the Kenyan leader said the two countries have agreed to champion the sustainable use of the blue economy resources to accelerate economic growth and development.

Kenyatta said that the port cities of Maputo and Mombasa form an integral part of the trade relations between the two countries.

“I encourage our relevant authorities to work much close together to see how we can partner and develop our port facilities as a sure way of improving trade linkages between our two countries,” the president said.

He said the two countries are also exploring the existing potential in the aviation sector between that is yet to be fully exploited and which will enhance greatly the tourism and trade ties. – Xinhua

One dead as gold mine strike in SA turns violent

No sex until I win elections: Raila Odinga appeals to supporters

Drivers queue for hours as Kenya reels from fuel shortage