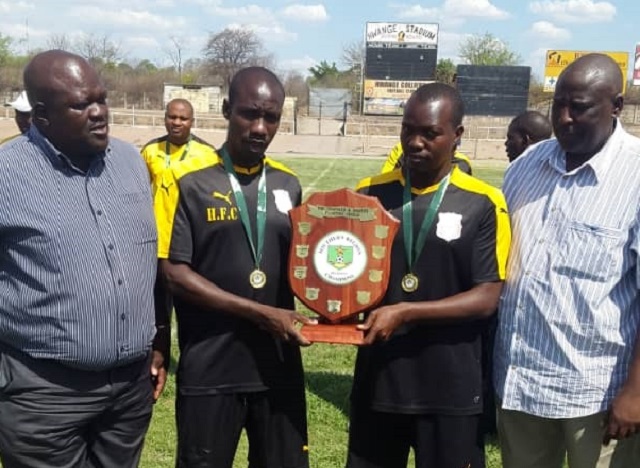 ZIFA Southern Region Division One league champions Hwange FC put the icing on the cake on a memorable season by silencing stubborn neighbours ZPC Hwange in the league finale played before a huge and appreciating crowd at the Colliery Stadium yesterday afternoon.

Chipangano, having been crowned kings a fortnight earlier, were in no mood for favours as they came into the game firing from all cylinders from the first whistle with coach Nation Dube selecting a strong squad and resting only first choice goalkeeper Taimon Mvula for his deputy Prince Phiri who managed to keep a clean sheet.

The coalminers deservedly surged into the lead on the quarter hour mark after a goalkeeping howler by ZPC Hwange shot stopper Harmony Nare who spilled a long range shot by Andrew Chuma to leave impressive striker Ernest Gwitima with all the time in the world to slot the rebound into the far post.

On the half mark Hwange doubled their advantage when overlapping defender Gerald Ndlovu’s sizzling cross from the right was met with a first time volley by the league’s top goal scorer Gilbert Zulu into the roof of the net to seal the electricity generators’ feat.

A double substitution by their coach Njabulo “JB” Dube of bringing Israel Mukahanana and Fanuel Shoko for Spar Dube and Mlungisi Ndlovu respectively five minutes from the break, breathed some life into ZPC Hwange’s moves but the Hwange rear-guard marshalled by veterans Felix Chindungwe, Obert Moyo, Gerald Ndlovu and Craven Banda were in an uncompromising mood to the final whistle.

At the end of a perfect season in which this defence quartet played their hearts out and silenced the prophets of doom who had labelled them “aged and spent forces” in pre-season, and some workhorse attitude in the middle of the park by Canaan Nkomo and Innocent Ndlovu coupled with some amazing gunslinger instincts by ageless Gilbert Zulu and Ernest Gwitima upfront, Hwange fans got their reward for believing in their team from the first game.

From nothing to something, the story of Mzoe7