Nyasha Mushekwi is heading to Madrid for surgery to be conducted by specialist Spanish doctors to try and find a long-term solution to the injury nightmare that has ravaged his otherwise impressive debut season in the Chinese Super League. 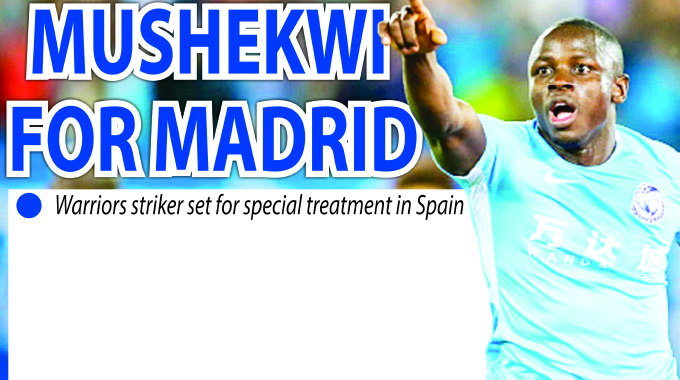 The injury, which requires the Zimbabwean international to undergo very painful and complicated procedures where he is injected a cocktail of drugs just before matches to help him play a part for his team, has also kept him away from the Warriors all year.

He was again not named in the squad released by coach Sunday Chidzambwa for the next AFCON qualifier against Liberia in Monrovia next month because of concerns over his health.

Mushekwi was not included in Dalian Yifang’s squad for their last league match against Hebei CFFC last Saturday which they lost 2-3 after doctors recommended he needs to be rested because of the injury that has been stalking him all season.

Colombian striker Duvier RIascos started in his place, as the spearhead of the attack, and opened the scoring in the fourth minute but the hosts turned the game around to win thanks to two assists from their Argentine star Ezequiel Lavezzi.

Mushekwi had played in the previous match, a demoralising 0-3 loss on the road to bottom club Guizhou Zhicheng, 10 days ago, but he didn’t last the entire game.

Dalian Yifang have been taking a huge gamble on Mushekwi because they need his goals and wanted him to go for specialist surgery once the club’s battle against relegation had been won.

The Zimbabwean forward is his team’s leading goalscorer with 14 of the 33 goals which Dalian Yifang have scored so far in the league campaign.

With three games to go, they are on 32 points, from 27 games, four points above relegation trouble in ninth place in the 16-team league, half of whose members are not yet safe from the chop.

Mushekwi told The Herald he was set to go to Madrid for his surgery, but that depended on complications related to the team’s battle against relegation.

He said he was likely to be out of action for at least four weeks after the surgery.

“I’m good (taking it) just one day at a time,” he said last week. “Might be going for my surgery soon in Madrid. Will keep you posted.

“I’m in pain. Not playing the next game (which they lost last Saturday). They’re trying to see if there’s need for me to play anymore.

“I’m likely to be out for maybe four weeks after surgery. I think we need to win just one more game or something for us to be safe. His 14-goal haul is the same as former Southampton ace and Italian international Graziano Pelle and former AC Milan forward Alexandre Pato of Brazil. Chinese

international Wu Lei leads the race for the Golden Boot with 25 goals while Nigeria’s World Cup forward Odion lghalo is in second place with 21 goals.

DRC striker Cedric Bakambu, the most expensive African player of all-time, who fired blanks in back-to-back AFCON qualifiers against Zimbabwe, is the second best among the African hitman in the league with 16 goals.

Ghanaian forward Frank Acheampong shares second spot with the former Sevilla hitman, among the best-scoring Africans in the Chinese Super League, with 16 goals.

That Mushekwi missed a huge chunk of the opening phase of the league, when he was being frozen out by the axed coach, and has been playing with the aid of regular dosages of drugs just to keep him on the field, makes his goal return special.

Brazilian International forwards Hulk and Oscar, who are the best paid players in the league, trail in his wake among the goal scorers with 12 goals apiece.

Mushekwi’s absence from the Warriors, while playing for his club, has been a source of speculation on the domestic front with some even suggesting the forward had fallen out with the game’s leadership.

The striker was forced to provide a graphic heart-wrenching video clip of the excruciating pain he endures, in a delicate procedure regularly performed by the medical staff of Dalian Yifang, just to enable him to feature for his Chinese Super League side in recent weeks.

The video clip shows the Zimbabwe international forward lying naked on a bed while a specialist doctor injects some drugs into his groin area to ease the pain, which has been haunting him for months now.

This is all meant to ensure he can, at least, run for the duration of a game.

Mushekwi is heard in the video moaning from the severe pain inflicted by the delicate procedure, which has to be done with the aid of an ultra-sound scan monitor, to enable the physician to pick the exact spot where the drugs have to be injected.

The 31-year-old writhes in pain as the needle is inserted into his groin area while the physician administers the drug into his body in what Mushekwi says is a painful routine he has to undergo on a regular basis.

“This is what I go through every week before my games to numb my pain so I can be able to play,” he revealed.

“And this only lasts me for about 60mins to 70mins the most and after that I’m back to running if not jogging on the pitch.

“I know people don’t understand but it hasn’t been easy.

The team needed to get out of relegation so they had to take extreme measures.

“I know it’s not easy for people to understand but this is me going through this for the last 10 weeks now.

“And they have to inject me at the correct place, this why they use like ultrasound while injecting me so they can see exactly otherwise they will hurt me.

He said it was unfortunate he has to do some fire-fighting all the time to explain his situation to try and make some people who keep either questioning his commitment to the Warriors or fuelling speculation of his alleged fallout with the game’s leaders understand his situation.

“I can’t keep trying to explain but my situation is a bit complicated . . . but I guess it is what it is,” he said. The Herald

All eyes on Jah Prayzah as ‘Chitubu’ launch nears

Mushekwi back in training in China