Battle of the Warriors

Five days after enduring the agony of losing yet another centre striker to injury, there was something to light up the mood in the Warriors camp with poster boy Khama Billiat being crowned the ABSA Premiership Payer for September. 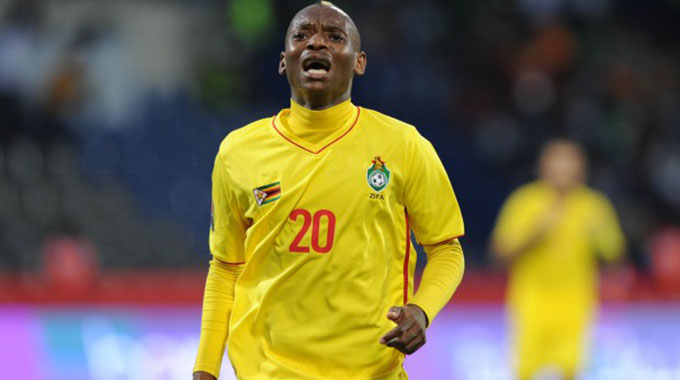 Billiat has immediately established himself into a darling of the Amakhosi fans since his move from Mamelodi Sundowns at the start of the season.

The Warriors international scooped the best player award on the day that the Soweto giants scored a double with their Italian mentor Giovanni Solinas being named Coach of the month.

Billiat and Solinas received R5 000 each from the league sponsors, Absa.

‘My time has come to an end’

The award also comes on the eve of a potentially exciting “Battle of the Warriors’’ at Moses Mabhida in Durban where Billiat and big goalkeeper George Chigova will no doubt be the focus of attention tomorrow in a Premiership tie between Chiefs and Polokwane City.

Fellow Zimbabweans — Willard Katsande and Teenage Hadebe for Chiefs and Polokwane striker Walter Musona are expected to also feature in that encounter.

But it is Billiat’s fine form that should come as good news for Warriors coach Sunday Chidzambwa who had a gloomy start to the week amid revelations that centre striker Evans Rusike had been ruled out for three weeks after picking an ankle injury in his side, SuperSport United’s MTN8 Penalty shoot-out defeat by Cape Town City.

Rusike’s injury left Chidzambwa with only Knox Mutizwa as the natural centre forward in the 23-man squad he had named for the tough African Cup of Nations clashes against Democratic Republic of Congo in Kinshasa next Saturday before coming back home to host the Leopards three days later at the National Sports Stadium.

Chidzambwa would also have been pleased to see left back Divine Lunga in good form on Wednesday night when his side Golden Arrows held giants Orlando Pirates to a goalless draw at Orlando stadium.

Lunga walked away with the Man of the Match award on the night, with Danny Phiri and Mutizwa also featuring in that game.

The veteran coach had already been robbed of the services of the trio of other central strikers Nyasha Mushekwi and Tino Kadewere before suffering the Rusike blow.

Billiat shook off an injury that threatened to scupper his return to the Warriors and scored Zimbabwe’s only goal in the 1-1 draw against Congo in Brazzaville, to maintain the pace in Group G where they are joint top with the DRC with four points each.

The 28-year-old forward has taken his form to the league and was instrumental in Kaizer Chiefs’ three-match winning streak last month. He had two goals and as many assists to his name in the three matches the club played in September.

Billiat’s contribution to Chiefs’ resurgence left Solinas purring with the Italian describing him as the equivalent of Lionel Messi in the Amakhosi.

In the period under review Billiat scored a double against Cape Town City and created a goal each in the wins over Free State Stars and AmaZulu.

“I’m grateful to have a coach like him (Solinas), but most importantly it’s about the team. We all know him, and he’s like that with everyone in training.

“I don’t see something special in it, he’s always like that. I’m grateful for the love that he has for me, and I love him too, just like everyone. I love the relationship that I have with him,” said Billiat.

Solinas seems to be getting the pieces back together nicely following a false start to his tenure in South Africa.

The Italian kicked off the month by changing the club’s fortunes with an impressive 4-1 away win against Cape Town City.

That first Absa Premiership win was to be the start of a great month for the club as it was followed by a 2-0 victory over Free State Stars in Bethlehem before defeating AmaZulu 2-0 to close off the victorious month of September.

Former Zimbabwe international Kaitano Tembo of SuperSport, Chigova’s coach Josef Vukusic and Orlando Pirates’ Milutin “Micho’’ Sredojevic were the other coaches who were mentioned for the good performances during the month.

Solinas credited his players after winning the award. Soon after being rivals on opposing ends tomorrow, Billiat and Chigova will set aside their rivalry to join hands and travel back home for the cause of their motherland.

Chigova yesterday told The Herald that he was happy for Billiat and the other Warriors who are doing well at their clubs.

“He has been good for his team and I hope he will continue like that. But I just hope we will collect three points when we play them on Saturday.

“It’s good to have so many players in form. It will boost our confidence as a nation and we hope to take that form into these two games against DRC.

“For us as a team, we would like to get six points from these games and it’s going to put us in a better position in the group. Playing inside three days is a bit tough because there is no much rest between the games,” said Chigova.

Moroccan referee Redouane Jiyed has been appointed to handle the evening kick off at the Complexe Omnisports Stade des Martyrs in Kinshasa.

Jiyed will be assisted by compatriots Yahya Nouali and Essam Benbapa. Samir Guezzaz is the fourth official while Cameroonian Alim Konate Abubakar will be the match commissioner. The reverse fixture scheduled for National Sports Stadium three days later will be handled by Egyptian referees.

Gehad Gerisha will be the referee and he will be assisted by Ahmed Hossam Eldin and Tahssen Abo El Sadat.

Ibrahim Nour Eldin will be the fourth official while Namibian Shilunga Eratsus is the match commissioner. The Herald.

‘My time has come to an end’