Paul Pogba has been stripped of the vice-captaincy of Manchester United by manager Jose Mourinho as tensions between United’s star midfielder and manager continue to rise. 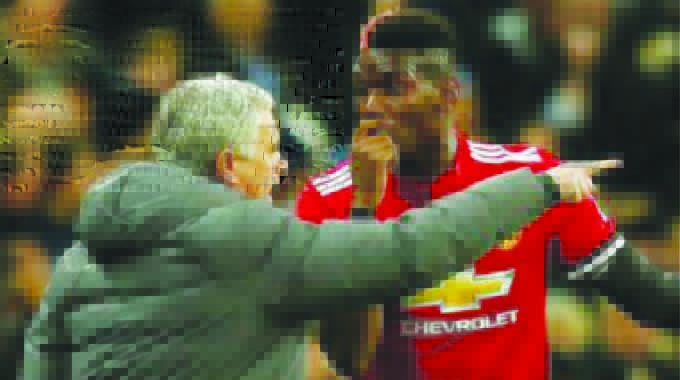 Mourinho and Pogba had a frosty exchange yesterday morning as the midfielder returned to training after being stripped of the Manchester United vice-captaincy.

The United manager denied reports of a bust-up between the pair, but yesterday’s interaction – captured by Sky Sports’ cameras – suggested otherwise.

On Tuesday, Pogba watched United from the stands at Old Trafford, but left before their penalty shootout, which ended in defeat to Derby County.

The France World Cup winner has previously been criticised for undermining Mourinho’s tactics, calling for his side to “attack, attack, attack” following their 1-1 Premier League draw against Wolves last weekend.

Sky Sports reporter James Cooper was at United’s training ground in the morning yesterday, and said he believes the ongoing saga will “play out like a pantomime”.

Cooper said: “One thing is clear now, and this is the one thing that has changed in the last 24 hours – the whole situation is now very much out in the open.”

Pogba has deputised as skipper in the absence of club captain Antonio Valencia on three occasions this season against Leicester and Brighton in the English Premier League and a Champions League soccer trip to Young Boys.

However, the French World Cup winner’s latest outspoken comments criticising United’s overly negative tactics after a 1-1 draw at home to newly-promoted Wolves on Saturday have provoked a reaction from Mourinho.

“The only truth is I made the decision of Paul not to be the second captain anymore,” said Mourinho after Tuesday night’s League Cup defeat to Derby County on penalties for which Pogba was rested.

“I am the manager I make these decisions, no fall out at all, no problem at all. The same person who takes the decision to make him second captain makes this decision now.”

According to The Times, Mourinho informed Pogba in front of his team-mates on Tuesday, claiming the 25-year-old “doesn’t represent what a captain is and Manchester United is bigger than anyone”.

The decision is the latest twist in an acrimonious relationship between the pair dating back to Mourinho dropping Pogba routinely for big games last season.

“Mourinho’s message to the United squad, delivered at Carrington today, was designed to underline his authority and remind the players that he is in charge,” added The Times report.

Fresh from playing a pivotal role in France’s World Cup success, Pogba, who cost United a then world record £89 million to bring back to the club from Juventus in 2016, has started to deliver on his price tag this season.

He has scored four times in seven appearances and also set up Fred’s opener against Wolves at the weekend.

However, he was also at fault when losing possession for Wolves’ equaliser that left United already eight points adrift of Premier League leaders Liverpool after six games.

“We are at home and we should play much better against Wolves. We are here to attack,” Pogba told the media after the match.

“I think teams are scared when they see Manchester United attacking and attacking. That was our mistake.”

Pogba has already been linked with a move away from Old Trafford with Barcelona interested before the close of the summer transfer window.

That speculation is unlikely to die down as long as Mourinho, who signed an extended contract until 2020 earlier this year, remains in charge.

An early Cup exit to Championship Derby, managed by one of Mourinho’s former pupils at Chelsea Frank Lampard, intensifies the pressure on the Portuguese. — AFP.

Triangle spoil the party for Mapeza