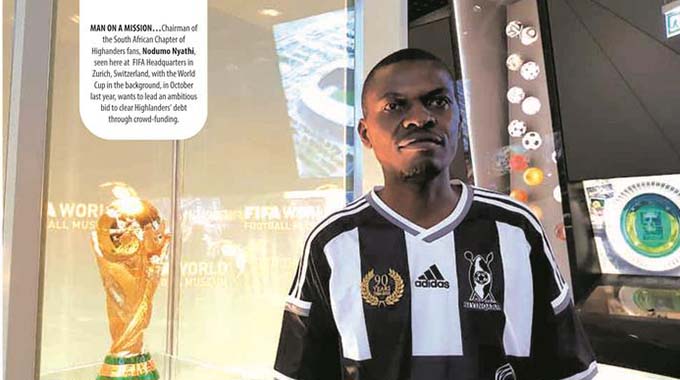 Highlanders fans based in South Africa have mooted an ambitious crowd-funding exercise to raise R30 million (about US$2 million) as part of their efforts to help the country’s oldest football club clear a crippling debt that has been weighing down heavily on the institution.

The bold initiative is the brainchild of the chairman of the Bosso South Africa Chapter Members, Nodumo Nyathi, one of the club’s most passionate fans who hopes to tap into the pockets of one million supporters of the club with each donating R30 to the cause.

Nyathi has been working in South Africa for some time now but such is his passion, for his beloved Bosso, he is a regular visitor to Barbourfields to cheer his team and is set to be in the City of Kings this weekend for the Chibuku Super Cup first round date against Yadah Stars.

‘’Highlanders FC SA Chapter Members will be at BF on Sunday . . . we are Bosso . . . as we get ready I would like to remind our lads that we fully are behind them,’’ posted Nyathi on his social media page with a picture of Highlanders official posing with the league title back in the years.

‘’Can they emulate the yesteryear stars? This is what we were used to . . . Fully packed BF from 12pm and enjoying such display of trophies we had won.’’

Highlanders have been choking under the weight of the debt, which soared past the $1 million mark this year, and it has affected some of the club’s operations in recent years.

Repeated efforts by the club’s members, over the years, to find a way to clear the debt have failed to bear fruit and, during one annual meeting, less than $500 was raised when a proposal was made for the members to donate towards the cause.

Nyathi believes he could have found a way to raise enough funds to clear the debt by targeting, at least, a million Bosso fans to donate R30 (about $2 each) towards the fund with the money then being channelled into the Bosso coffers.

‘’I dreamt about Highlanders FC and here is the dream,’’ Nyathi wrote on his social media pages yesterday. ‘’I was talking to Bosso South Africa Chapter Members and said we can easily help Bosso out of debt.

‘’I was talking to 1 million Bosso Fans in South Africa and asked them that do they know that if we ALL donate R30 from our 2018 Salaries we can raise R30 x 1 million?

And there has been a wave of support for Nyathi.

‘’I ain’t Bosso, but well done Notts, if we have passion with what we love, be it soccer team, country, job, things will move in the right direction,’’ said Ronald Chidyausiku in a response.

Eddie Chihava said he also was not a Highlanders supporter but would back the initiative with a donation of his R30 to the cause.

‘’I am not a BOSSO fan. But, on this, I support (you). My R30 is guaranteed on this noble cause.’’ Nomathemba Nyathi called it a ‘’great idea, our chairman,’’ while Mandla Nkosi said they will ‘’will (always) support Highlander FC, Bulawayo, our team.’’

Even those who are not in South Africa, like Patrick Ndlovu, have warmed up to the cause.

‘’While I’m not in SA, I’m willing to donate (brother) Nodumo Nyathi.’’

Highlanders chairman Kenneth Mhlope said reducing the club’s ballooning debt, which he said threatened the very existence of the team, was one of his immediate priorities when he took over as the leader of the team in February this year.

“My focus will be on uniting the Bosso family as I believe that we can achieve a lot as a united front,’’ he said when he was unveiled as the Bosso chairman.

‘’The idea is Highlanders FC; it is this idea which must prevail, not individuals or competing interests. Let us embrace the truth that we will succeed only if we’re united.

‘’Another important task is managing and clearing our debt. I believe it’s important to have closure on this. It’s also important that we establish the true value of the debt and target particular sales to reduce the debt.

‘’We need to make a resolution that revenue from a targeted sale or percentage goes towards reducing our debt. We cannot sit and watch it grow. I believe the debt reduction has to come from within us.’’

Bosso have a $350 000 annual sponsorship package from NetOne which goes into the payment of the salaries of the players and the coaching staff. Their biggest rivals, Dynamos and CAPS United also have a similar partnership deal with NetOne. The deal was initially meant to run for just a season but reports have begun to emerge that it could be extended for another three seasons at the end of the campaign.

Highlanders and Dynamos, the country’s two biggest football clubs, have struggled in recent years as they have been overshadowed by the well-funded challengers from the platinum miners who are involved in what looks like a two-horse race for the league championship this year.

Should either platinum side win the league title, as is largely expected, it will mark the first time, in the 56-year history of the domestic championship, that successive titles have been won by clubs from outside the two biggest cities of Harare and Bulawayo. The Herald