The crippling industrial action by players, which has thrown Dynamos’ preparations for their crucial league tie against Bulawayo City at Barbourfields tomorrow into disarray, has claimed the scalps of treasurer Moses Chikwairo and secretary-general Webster Marechera. 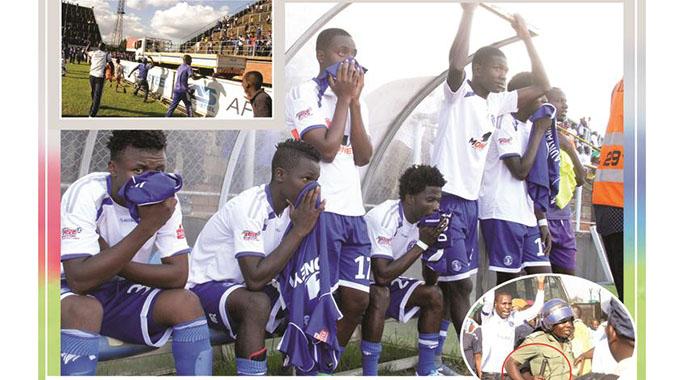 The Glamour Boys boycotted training from Monday this week demanding to be paid their winning bonuses first.

The situation only normalised yesterday after the intervention of club president, Solomon Sanyamandwe, who addressed the players before they undertook their first training session this week before their scheduled departure for Bulawayo this morning.

The failure by the club to pay players their dues on time has been blamed on Chikwairo and Marechera who stand accused of allegedly misappropriating funds.

Sanyamandwe confirmed the sacking of the duo and said Moses Shumba has since been roped in to fill the treasurer’s post, on an interim basis, while the secretary general’s post will be filled in the coming days.

“The players were not happy with the treasurer and the secretary-general in terms of how they were handling their affairs,” said Sanyamandwe.

“The two were not addressing the players’ problems and we have decided to relieve them of their duties with immediate effect.

“I am glad that the players are now back in training as we have since paid some of their winning bonuses.

“We had to take action because if we didn’t do what we did, the players would have continued with the strike. We will send the two their papers by end of day today (yesterday).’’

The DeMbare boss said he had to be ruthless to deal with the crisis.

“There was nothing I could do except to take action, I am the president and, at the end of the day, I will be blamed for being lenient with incompetent staff,’’ said Sanyamandwe.

“All the money we are realising from gate-takings is going to a local bank which we owe. So there are no other means to get money, we are digging into our pockets, so the books can’t just be out of order.

“Shumba (Moses) will be the acting treasurer while we deliberate on who comes in as the secretary-general.

“We did all this for the best of the players and they were very happy with the decision. I can now confidently say the situation at the club has normalised since the players didn’t want the two in the executive.’’

Dynamos will also be without their central defensive partnership of Marshal Machazani and Godfrey Mukambi who are serving suspensions.

Obey Mwerahari is also out injured while Kingston Nkhatha’s papers are not yet in order.

Assistant coach Joseph Takaringofa warned his charges against underrating their opponents if they are to bag maximum points.

“We haven’t prepared the way we would have wanted as a team for this crucial fixture against Bulawayo City,” said Takaringofa.

“I am glad the problems have now been solved and the team is now focused on the job at hand.

“We obviously respect Bulawayo City but, in as much as we do that, we need to collect maximum points.

“The players are psyched up for the game and we are ready. We should just keep focus and concentrate on the job at hand otherwise the match will be tough but we need the points for us to move up the ladder.’’
-The Herald