Mr Maduro was speaking at a military event in Caracas when the alleged attack occurred.

Live footage of his speech shows the president suddenly looking upwards – startled – and dozens of soldiers running away.

Mr Maduro has blamed Colombia for the attack – something denied by Bogota as a “baseless” accusation.

US judge dismisses most money-laundering charges against…

What is known about the alleged attack?

The incident happened when Mr Maduro was speaking at an event to mark the 81st anniversary of the national army.

Mr Maduro later said in a national address: “A flying object exploded near me, a big explosion. Seconds later there was a second explosion.” 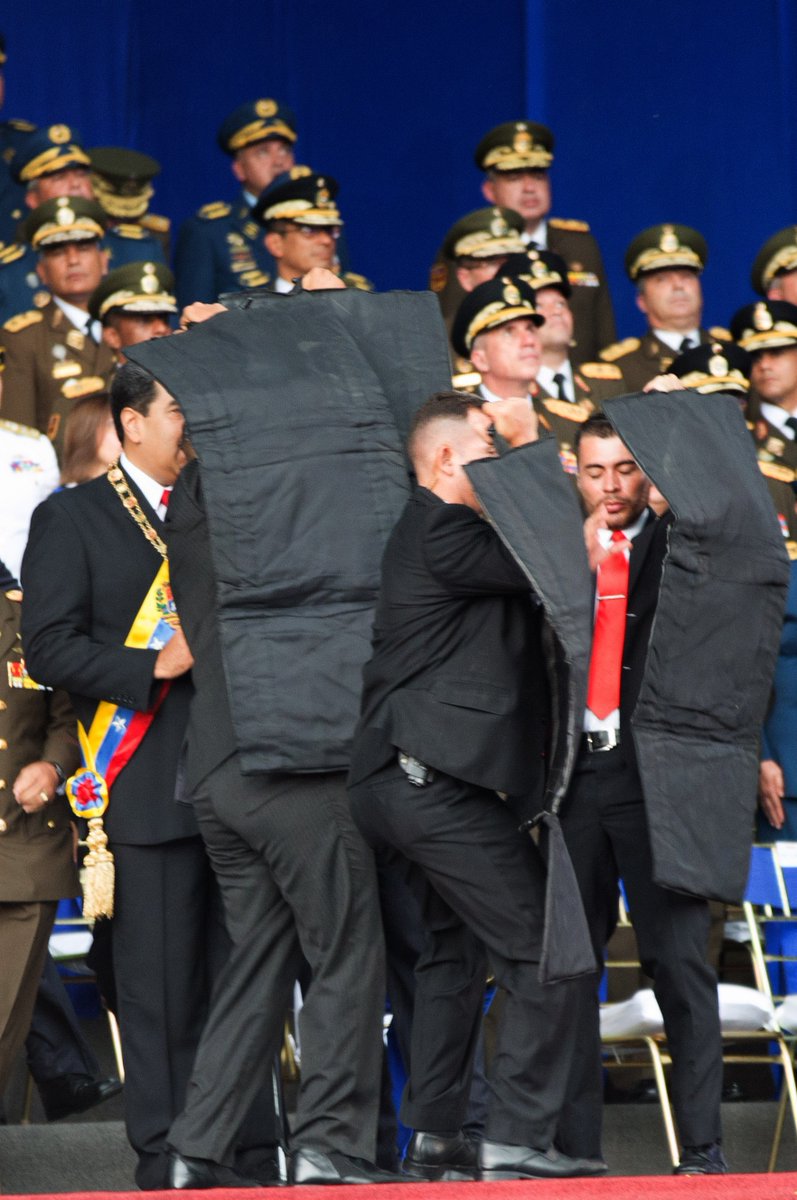 Mr Maduro accused neighbouring Colombia and elements within the US of instigating “a right-wing plot” to kill him.

He added that he had “no doubt” Colombian President Juan Manuel Santos was “behind this attack”.

The Venezuelan leader, who has previously accused the US of plotting against him, provided no evidence to back his claim.

The Colombian government has denied any involvement, saying there is “no basis” to Mr Maduro’s allegations.

By contrast, Mr Rodriguez accused Venezuela’s right-wing opposition of carrying out the attack.

“After losing the vote, they failed again,” Mr Rodriguez said.

He was referring to May’s presidential elections, where Mr Maduro was re-elected for another six-year term.

However, Hasler Inglesias, a youth leader with the opposition Voluntad Popular Party, told the BBC: “We didn’t know what was happening. It’s hard to believe that the opposition is going to make an attempt when they have never made an attempt in this way in 20 years.”

Meanwhile, a little-known group called Soldiers in T-shirts said on social media that it was behind the alleged attack.

It said it had planned to fly two explosives-laden drones at Mr Maduro, but they were shot down by the military..

The claim was not backed up by any evidence, and the group did not respond to media requests for comment.

To add further to the confusion, firefighters at the scene disputed the government’s version of events, the Associated Press reports.

There are still lots of unanswered questions in this, the latest plot twist in surreal Venezuela.

President Maduro and his people often accuse the opposition, Colombia or the US of trying to sabotage his government.

Much like last year when a helicopter attacked the Supreme Court in what Nicolás Maduro called a “terrorist” attack, conspiracy theories will abound – and already different versions of events are being circulated.

In a country where it’s hard to operate as a journalist and where freedom of speech isn’t respected, getting to the truth is hard.

What many people fear though is that the government will use this incident to justify a crackdown on any political opponents.

Has anything similar happened before?

In June 2017, a helicopter attacked and dropped grenades on Venezuela’s Supreme Court.

Oscar Pérez, a rogue elite helicopter pilot, claimed he carried out the helicopter attack and called on Venezuelans to rise up against the government of President Maduro.

He was killed by police in a siege near Caracas in January.

Who is President Maduro?

Mr Maduro has managed to split opinion almost as much as his predecessor in office, Hugo Chávez.

Since assuming office in 2013, Mr Maduro’s administration has drawn widespread condemnation from a string of nations worldwide for undermining democracy and violating human rights in his country.

His opponents paint him as a ruthless despot who detains his political rivals on overly harsh charges pressed by a judiciary under his party’s control, while his followers say he is protecting the country from another coup.

His re-election in May came amid a deep economic crisis which has been driving hundreds of thousands of Venezuelans from the oil-rich country.

However, there is still a loyal core of people who support Mr Maduro and his United Socialist Party (PSUV), saying Venezuela’s problems are caused not by the government but by imperialist forces such as the US. BBC.

US judge dismisses most money-laundering charges against Maduro ally Saab

Fugitive businessman close to Venezuela’s Maduro extradited to US