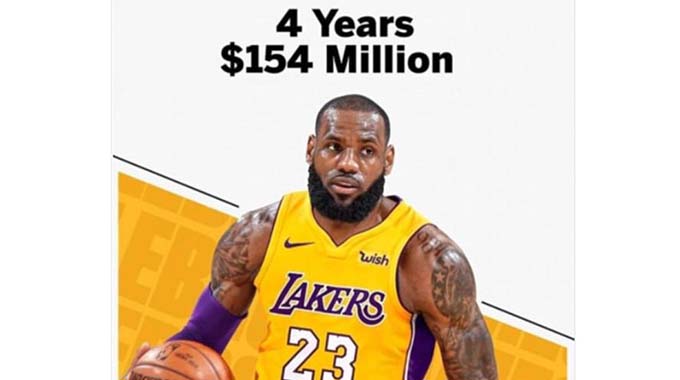 New deal gives him $38.5 million a year…He will take about $2.2 million a month…Or a cool $106 600 every day from Lakers Basketball star LeBron James has joined Los Angeles Lakers in a four-year deal worth $154m (£116m). The 33-year-old, who has played in eight consecutive NBA finals, moves to the Lakers from Cleveland Cavaliers.

James, who became a free agent on July 1, is widely considered the best basketball player in the world.

“This will always be home.”

The three-time NBA champion was selected by the Cavaliers in 2003 as the first pick in the player draft and established himself as one of the league’s best players. He was named the NBA’s most valuable player in 2009 and 2010 and controversially moved to Miami in 2010.

Forbes rich list: Which celebrities earned the most over the…

The return of Magic Johnson

James won his first NBA title in 2012 and added a second championship the following year.

He then opted out of the final two years of his Miami contract and returned to Cleveland.

James helped Cleveland to their first NBA title in 2016, as they overturned a 3-1 deficit in the NBA finals to beat Golden State. Cleveland’s success also ended the city’s 52-year wait for a major sporting title.

James will be playing for the Los Angeles Lakers on a four-year, $153.3 million contract. He will try to bring the storied franchise another championship.

The announcement was made through his agency, Klutch Sports Group, which announced the deal as $154 million.

ESPN’s Brian Windhorst reported that the fourth year is a player option. It’s the longest deal James has signed since inking a six-year contract with the Miami Heat in 2010. His previous three deals were three years or shorter.

James leaves his hometown team as a free agent for the second time in his career. Four years ago, James had stated his intention to finish his career with the Cleveland Cavaliers.

Whether the four-time MVP and 14-time All-Star does that or not, he certainly has left his mark on his city.

James thanked his home area in an Instagram story. He wrote in text overlaying a photo from the Cavaliers’ 2016 NBA title victory parade, “Thank you Northeast Ohio for an incredible 4 seasons. This will always be home.”

He delivered the first championship to the sports-obsessed city in 52 years and did so with storybook gusto, helping the Cavaliers become the first team in NBA Finals history to rally from a 3-1 series deficit to win it all.

The team he took down, the Golden State Warriors, had the best regular-season record in league history, at 73-9.

“Words do not express the meaning and the feeling this accomplishment brought to the people of Northeast Ohio,” Cavaliers owner Dan Gilbert said in a lengthy statement thanking James. “None of this would have happened if LeBron James did not agree to come back home and lead the Cavaliers to the promised land . . .’’ – BBC Sport.

Caster Semenya, Cyril Ramaphosa among Time’s 100 most influential people of 2019

The return of Magic Johnson