A Harare waitress, Debra, left many envious of her job yesterday after a receipt from new nightclub, Sankayi showed a bill of $8 862 with her tip being $805. 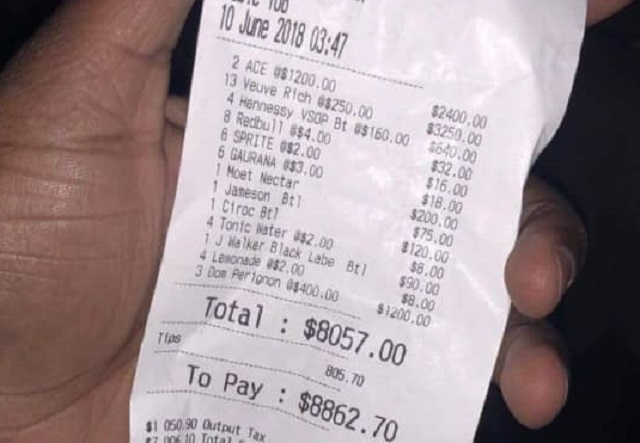 Over the years, waitresses have been looked down on especially considering that most get paid up to $150 a month. But this tip from one table — which is double the salary of most civil servants — has got people talking with some waitresses from Bulawayo saying they need to relocate to the capital.

Club Sankayi that is located in the Harare CBD and is run by pompous businessman — Genius “Ginimbi” Kadungure — is certainly taking over from Pablo’z VIP Club that had positioned itself as the “big spenders” home in Harare.

Now, it seems the big spenders — most whom are Ginimbi’s friends — are now hanging out at Sankayi.

An interview with a patron who frequents the spot showed that a lot of women — especially strippers — were flocking to Sankayi in search of jobs.

“Sankayi is the place to be. Already, about two strippers from Private Lounge have left their trade to work as waitresses at Sankayi as they know the club attracts wealthy men. It seems to be paying off for them because Genius and his crew know how to party and spend money on women,” said the patron who requested anonymity.

One lady who also frequents the spot said it was her new home because she rarely buys her own drinks.

“What I love most about Sankayi is that the men are very generous. All the times I’ve been there, I’ve barely bought drinks for myself as there’re so many people who offer to buy for me,” she said.

On the receipt, Armand de Brignac champagne, Ace of Spades, which is sold for $1 200 per bottle at the club was the most expensive followed by other popular champagnes Veuve Clicquot Rich and Moet.

Club Sankayi, which is barely a month old, has already attracted big names such as DRC’s Fally Ipupa who was there two weeks ago. The Chronicle

Life in the shoes of a short girl – Living without hands, knees