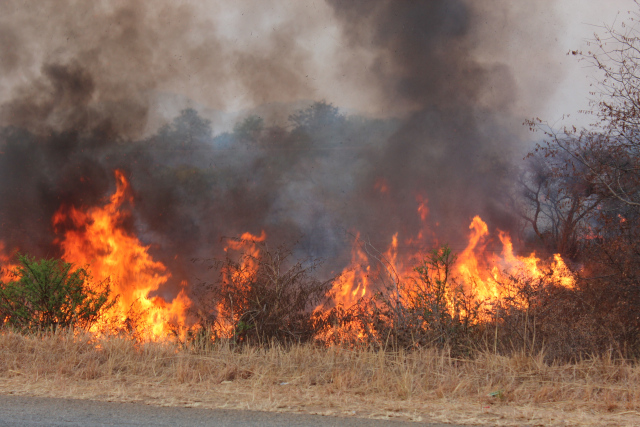 The 1 268 534 hectares that went up in smoke, destroying valuable deciduous trees, wildlife and property represents a 300 percent increase of total land consumed by fire in the early stages of the land reform programme.

In 2001, a total 400 000 hectares was burnt by veld fire, according to the 2017 veld fire statistics released by the Environmental Management Agency (Ema) on Thursday.

In 2016 a total of 1 197 335 hectares of land were consumed by veld fires from various causes such as land clearing, arson, poaching, illegal mining, burning waster, unattended fires, smoking out snakes and electric faults.

The statutory body responsible for ensuring protection of the environment — said veld fires have emerged to be one of the greatest environmental challenges in Zimbabwe.

“Over the years, an average of a million hectares is burnt each year, resulting in loss of pasture, forestry resources, plantations, livestock, property and sadly human lives,” Ema publicity manager Steady Kangata said.

Between 2010 and 2015, 72 lives were lost and property worth millions of dollars was destroyed, according to Ema statistics.

Ema is currently encouraging the undertaking of projects such as beekeeping, the rearing of quail birds, hay bailing, thatch grass combing and fireguard construction for communities to better understand the importance of maintaining the ecosystem.

The statutory body has various campaigns in which it urges traditional leaders to use their positions to raise awareness on the dangers of veld fires and the need to prevent them.

A resettled farmer, in Goromonzi, Owen Nyamutevera said farmers were not entirely to blame for the spike in veld fires.

“We are doing all we can to minimise risks associated with veld fires by establishing and maintaining fireguards. But due to high poverty levels a lot of villagers have taken to lighting fires to catch mice making it difficult to contain wild fires,” he said.

The fight to prevent veld fires has over the years been hampered by very few custodial sentences given out despite the high deaths rate caused by the destructive scourge which continues to occur with significant frequency and in intensity across the country’s 10 provinces.

There has, however, been some unorthodox support from government which recently said it will repossess land from resettled farmers who cut down trees to cure tobacco and who ignite veld fires.

Minister of Land, Agriculture and Rural Settlement Perrance Shiri issued the chilling warning recently, saying while his ministry notices improvements in production in resettlement areas, there was need to improve sustainable land utilisation and production.

“I believe that as Zimbabweans we all share a common objective to see order and increased production on farms,” Shiri said.  DailyNews

Man (80) burns to death in veldfire