Sam Allardyce has been sacked as Everton manager after six months. 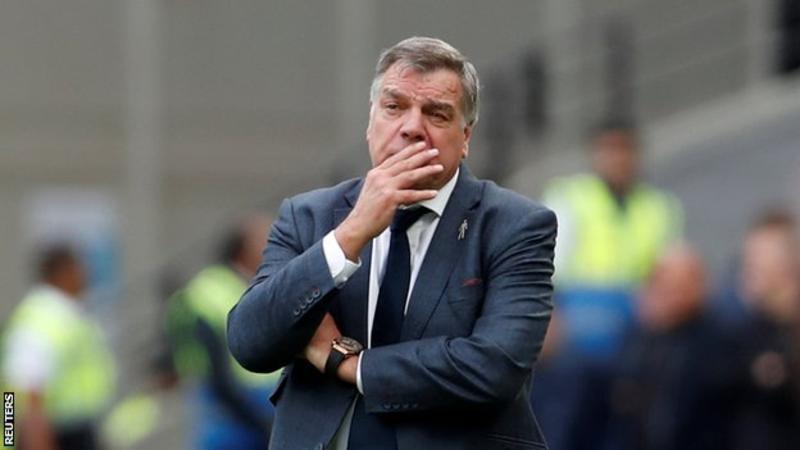 The 63-year-old signed a contract until June 2019 when he took over in November following Ronald Koeman’s dismissal.

Everton, who were 13th in the Premier League when Allardyce arrived, finished the season in eighth.

Allardyce has been heavily criticised by fans for his management and Everton’s style of play since he took over and the club said the decision was part of their “longer-term plan”.

It is understood former Hull City and Watford boss Marco Silva is the main candidate to succeed Allardyce.

Everton have also been interested in Shakhtar Donetsk coach Paulo Fonseca, although he is also a contender to replace David Moyes at West Ham.

Toffees are ‘grateful’ to Allardyce

Everton chief executive Denise Barrett-Baxendale thanked Allardyce, adding: “Sam was brought in at a challenging time last season to provide us with some stability and we are grateful to him for doing that.

“However, we have made the decision that, as part of our longer-term plan, we will be appointing a new manager this summer and will be commencing this process immediately.”

In the Premier League, Everton won 10 matches, lost six and drew eight under Allardyce, his reign ending with a 3-1 defeat by West Ham on the final day of the season.

He took over after a poor start to the season under Dutchman Koeman left the club in the relegation zone with two wins from nine matches.

Everton were unbeaten in their first six league matches under Allardyce and claimed their only Europa League win under the ex-Crystal Palace, Sunderland, Blackburn, West Ham, Bolton and Newcastle boss.

However, he was booed by fans following his side’s 2-1 defeat at Burnley in March, and was again criticised after their draw with Swansea six weeks later.

The club apologised to Allardyce in April after a survey was sent to fans asking them to rank their manager’s performance on a scale of zero to 10.

The former England manager said in April that he had spoken with Moshiri and that he would remain at the club next season.

Wayne Rooney’s future at the club was reported to have rested on whether Allardyce would be manager next season.

The former England striker, 32, has agreed a deal in principle that could see him leave for Major League Soccer side DC United this summer in a £12.5m deal.

The Toffees announced a major restructure of their board on Tuesday, as Barrett-Baxendale replaced Robert Elstone as chief executive.

Allardyce, who passed 1,000 games in charge of an English club in January, said he was “disgusted” by the club’s decision to make the changes public without his knowledge, according to the Liverpool Echo.

“I’m shocked, disappointed and disgusted that the football club didn’t have the decency to tell me, my director of football and my staff about the changes,” said Allardyce.

“They must have been in the pipeline for a considerable time but no-one thought to tell me and my staff.” BBC Sport

Sam Allardyce: England manager leaves after one match in charge