Dynamos coach Lloyd Mutasa could afford to put on a wide smile on his face after his team finally remembered how to win yesterday when they edged battling Bulawayo City in a Castle Lager Premier Soccer League match at Rufaro. 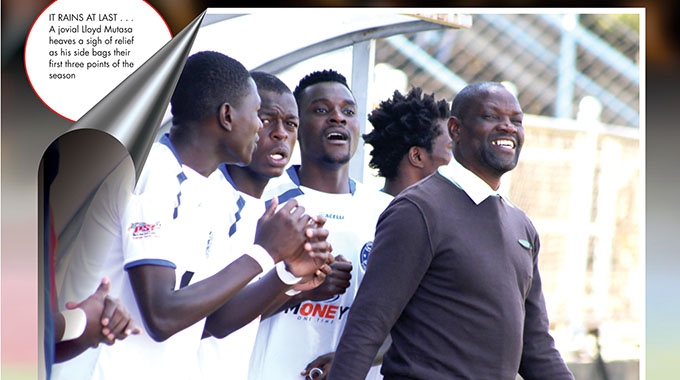 Blessing Moyo gave the Glamour Boys their first win in eight games from a free-kick to add to James Marufu’s 71st minute strike after Bulawayo City’s second half substitute Nhlanhla Ndhlovu’s swift equaliser had threatened to spoil the day for the faltering Harare giants.

DeMbare should count themselves fortunate after Bulawayo City missed a penalty in the first minute of the game which could have complicated life for Mutasa and his men had Ishmael Wadi not crashed his effort against the woodwork.

Still, the win should come as a big relief to the DeMbare family whose supporters are now torn in two. Stung by the team’s pathetic displays, a section of DeMbare supporters last Friday called for a boycott of the team’s home matches but the other section aligned to the club’s executive could have had the last laugh yesterday after some of the supporters ignored the call.

Nevertheless, it was still a small crowd by Dynamos’ standards and they still enjoyed the victory.

And Mutasa, who is sitting on a three-match ultimatum, should have been the most relieved of the lot with the win as Dynamos rose from the bottom of the table to 15th place.

“We are a bit relieved, but we are still in the murky waters. I am sure this win was long overdue and you could see it wasn’t an easy match coming from these draws and defeats; it’s not easy to conjure up a victory. The youngsters fought to the death to get it.

“It can probably add confidence to the youngsters that if you train well and train hard, matches can be won and this becomes proof of that. We hope the boys know we are still down there and there is still a lot of work to be done.

“The good part is these youngsters showed character. You are low in confidence, you concede a penalty and that penalty is saved and then the guys get into the game. We get a goal and the other team equalises and we keep fighting and we get a second goal. For now I cannot ask for more,” said Mutasa.

The 50-year-old gaffer believed it was their day after DeMbare survived a first minute scare when Marshall Machazane handled inside the box in a frantic attempt to intercept Timothy January’s shot.

But Wadi crashed his effort against the crossbar with the keeper Tonderai Mateyaunga beaten. Still Bulawayo City went on to dominate the opening 45 minutes but both teams failed to find the back of the nets.

Marufu made the difference in the 71st minute with a well struck grounder from a distance responding to a square ball by Peace Makaha who had made a spirited run down the right flank.

However, the lead barely lasted a minute as Amakhosi’s substitute Ndhlovu tapped in from close range when Mateyaunga parried January’s blistering shot back into play from the restart.

In the dramatic six-minute period, DeMbare fans were back on their feet after Marufu had won a free-kick just outside the box and Moyo managed to circumvent the wall from the set-piece with a low shot from a distance to the far left of the keeper.

Bulawayo City coach Darlington Dodo was not impressed by the way his team lost the game, especially the manner in which goalkeeper Wellington Muuya shipped in goals.

The Amakhosi coach said his team has the capacity but their performance yesterday was “a sign of something that is not really good.”

“It’s very stressing but I think we had a good game-plan and we played the way we wanted. If you look at the way we started from the word go we got a penalty within one and half minutes and it showed the intent that we had; that we wanted to get an early goal as quick as possible then we settle our nerves and we start playing the way we want.

“But when you get a penalty in those minutes and you miss, obviously that was going to be the turning point of the game because the whole first half we dominated but we kept on missing chances.

“It was unfortunate in the second half the goalkeeper let us down because if you look at both goals I don’t think they were supposed to get in. He was supposed to save us, that’s his duty.

“They were shot from deep inside and he is beaten from such a distance, it’s sad,” said Dodo.