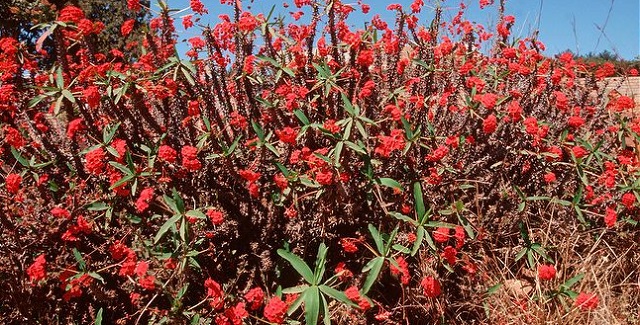 A family from Old Lobengula has been tormented by a flower for almost six months as it reportedly made weird sounds during the night, forcing tenants to vacate the house.

The flower, popularly known as ‘korona’ crown of thorns, scared off people who once stayed at the house as they heard frightening sounds during the night.

A neighbour who spoke on condition of anonymity said:”A number of tenants have come and gone claiming that they fail to sleep as there will be scary sounds.

“The owner of the house stays at her rural home and in February when she came to collect her rentals she found the house empty after the tenants had left following the weird sounds.

“They told us that the sounds they were hearing at night were not of cats as we assumed, but at times it was like that of goats or snakes.

Johane Masowe Way of Worshipping and Life: The Truth vs…

Why do Masowe reject the scriptures that Jesus Christ…

“They said they failed to sleep at night as the sounds were disturbing and to make matters worse, they once woke up and checked outside, but never saw anything though they kept hearing the sounds coming from the flowers,” said the source.

It is reported that the house owner Thelma Maphosa never believed the tenants’ story saying the cats were the ones making noise during the night.

“She then looked for another tenant and also stayed for the whole month of March saying she wanted to see whether the new tenant would complain of the sounds as well.

“After a few weeks, Maphosa and the new tenant started complaining of the sounds. Fortunately, the man goes to Johane Masowe Church so they came and had all-night prayers at the house that is when they revealed that the problem was with the flower.

“It turned out that the flower was not an ordinary one, but someone had used magical powers that it turns into certain creatures at night.

“On the following morning they dug it out and burnt it in the bush,” said the source.

When Maphosa was contacted for comment, she confirmed the reports saying: “We discovered that a certain flower which was planted at my house was not a real one as we thought.

“One of the people who once rented at my house planted that flower and since sometime last year no tenant stayed at the house for more than a month as they ran away from the sounds they heard at night.

“I never want to see flowers in my life because I have learnt a lesson.” B-Metro

Johane Masowe Way of Worshipping and Life: The Truth vs Myths and Lies

Why do Masowe reject the scriptures that Jesus Christ endorsed?