Following the media frenzy that surrounded the national team call-up of Zimbabwean footballers plying their trade overseas last year, including some who had never set foot in their motherland, B-Metro caught up with a safe pair of hands, Tando Velaphi (pictured), who plays in the Australian top-flight league. 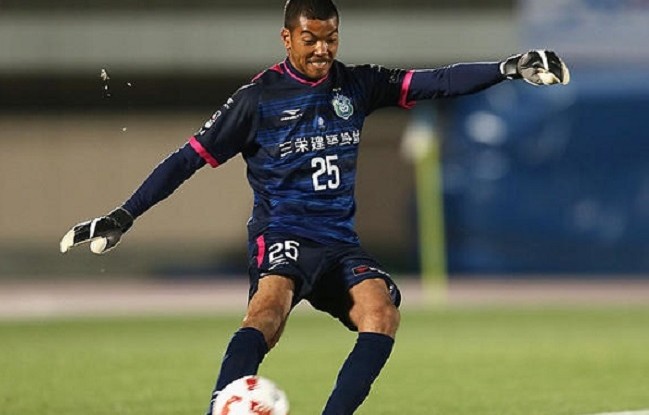 Velaphi’s father was born and raised in Zimbabwe and moved to Australia in his early 20’s where he met Velaphi’s mother in Perth, Australia, where he grew up. He began his football career in Australia, playing for a team called Perth SC.

The 30-year-old shot stopper guards the posts for a team called Wellington Phoenix.The club is based in New Zealand but is licensed to compete in the Australian A league by the Australian Football Federation.

Before playing for Wellington Phoenix, Velaphi was playing in Japan, for an outfit named Shonan Bellmare,in a league that was more competitive than that of Australia.

“The football culture is slightly different in Japan and the support from fans is immense! In Australia, football is probably 4th or so in terms of media coverage in sports, while in Japan, football is up there with baseball as the number 1 sport. The large investment from sponsors for TV rights makes the league extremely competitive across the board and the technical level of the players in Japan is really high. It’s helped take my game to another level.

“There are some quality players in Japan who come from Brazil, and are established and a lot of the Japanese national team play there,” said Velaphi.

One such quality player is Isoo Alves de Assis Silva affectionately known as Joe currently turning out for Nagoya Grampus.

Japan offers a lot of lucrative deals to players as their players can be paid from $170 000 to $280 000 per month depending on the terms of the contract.

But one would be left with questions why Velaphi turned his back on the Japanese league to go back to Australia where he began his football career? He was relegated as back-up goalkeeper to Yota Akimoto throughout Shonan’s triumphant 2017 Japanese Division 2 League campaign where they finished as champions.

Velaphi, whose mother is Japanese, made five appearances for Shonan across two seasons in Japan, having left Melbourne City in 2016.

With all this experience abroad, Velaphi itches to play for the Warriors and arrangements are under way to get the player on the field.

“I’ve had some initial contact with some of the authorities from the Football Association (Zifa) of Zimbabwe over the last couple of months. I believe they are keeping tabs on my progress over here, so hopefully I can be involved sooner rather than later. Obviously the chance to represent your country at international level is an honour and a privilege. I understand it also comes with a great deal of responsibility. Hopefully I get the opportunity to do so soon and can do the nation proud when am called upon,”said Velaphi.

“Grobbelaar was incredible to play at top level at an old age as well as Buffon who we see currently just going from strength to strength. I think the important thing is to not put limits on how far you can or can’t go. The main thing is to try and improve yourself each day to be a better footballer. If you get joy out of doing that each day, then who knows how far you can go,” he said. B-Metro