Operation Restore Dignity in Women! Two grannies shocked the Sizinda suburb community in Bulawayo with their heroic acts, ganging up to attack an alleged rapist. 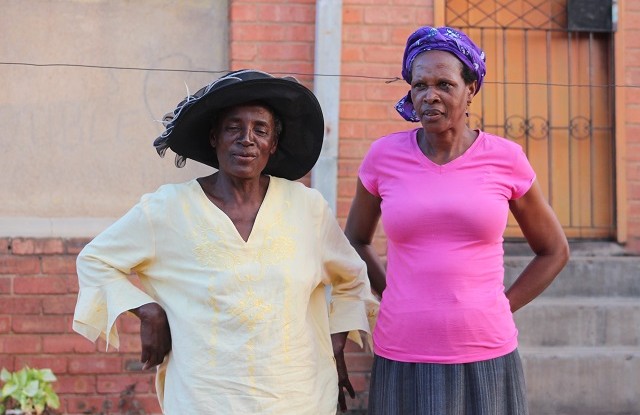 The would-be rapist, whose name is yet to be established but is said to be from Tshabalala suburb, fled in his birthday suit when overpowered by the relatively aged women.

The super women, Grace Sibanda (65) and Rashiwe Mathe (50) narrated how they defied the stereotype that presented elderly women as vulnerable and weak.

“He was stark naked, I bumped into him at close range as he was about to pounce on me. He started insulting me and telling me that he was going to kill us. I screamed for Mathe’s attention. She was sitting in the shade as I was harvesting some maize,” said Sibanda. The drama then began.

“We both wrestled the youthful man whose manhood clearly showed that he meant evil upon us. We were in the company of my 11-year-old granddaughter and she is still shaken. He kept telling us that we had made a mistake and he was going to teach us a lesson,” she said.

The women stoned him with rocks and pebbles which they picked from the fields until he gave up and fled and the golden girls set to the chase.

“After he failed to overpower us, he rose and took to his heels, leaving all his clothes behind. We were at his heels and ran from the fields towards the main road. He outran us,” said Mathe.

A community search team went out on a manhunt, they saw him, but he outran all of them, still naked in the bush.

The women then went to report the matter at Tshabalala Police Station.

“When we went to the police, we were told that he had been there already with his aunt and claimed to have been influenced by drugs. He said we took away his clothes and he had to steal some clothes hung on a washing line at some house in Sizinda. I think the police officers were just pathetic to let him go,” said Mathe.

“These youths of today are very disrespectful. This man must be in his 30s, he can be my son, or even grandson. For him to attack an elderly person like me shows that he has lost it. He needs deliverance,” added Sibanda.

Sibanda and Mathe said they were disappointed by the manner in which police at Tshabalala station handled their matter.

Police officers on duty who handled the matter allegedly told the women that they had no case as the man was under the influence of drugs.

“We went to the police and they told us that he was under the influence of drugs so they couldn’t charge him with attempted rape. They said he was on his way to watch a cricket match in town. I just wonder how someone going to watch a cricket match can sneak on me in the fields while in his birthday suit. These are the things that make us fear to report cases because police make fools out of us,” she said.