Bulawayo based textile giant, Merlin has re-opened following the implementation of a business rescue strategy involving immediate injection of $2.1 million minimum working capital by one of the firm’s creditors. 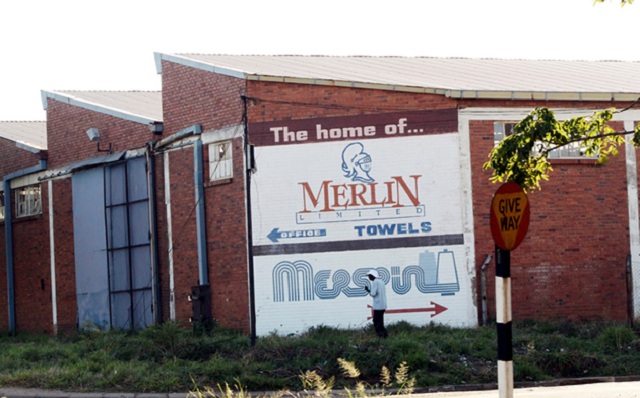 The firm had been defunct after it was placed under judicial management in 2012. Last week, the company flighted an advert indicating that it was disposing some of its equipment through an auction sale to be conducted in Bulawayo next week.

In an interview on Friday, Merlin judicial manager Mr Cecil Madondo said: “Merlin is now up and operations have resumed with feed material such as yarn having been procured.

Last week, we also approached Zesa and Bulawayo City Council seeking reconnection of water and electricity at the factory.

Retrenched workers pour their hearts out

“I still have to make an arrangement to link you up with the workers at the company’s premises so that you can interview them for further details. What I can say for now regarding the advert on the impending auction sale is that we are conducting it to dispose of non-core assets (not in use).”

“But before the assets are disposed, we have to seek approval through the High Court, which application we have already made following a resolution passed by the creditors and members at a meeting held in Bulawayo recently. However, I am yet to get a response from the Master of the High Court,” he said.

In terms of Section 307 of the Companies Act, Mr Madondo said, a judicial manager was required to make an application to the High Court seeking approval for the disposal of the company’s assets.Mr Madondo is on record saying one of Merlin’s major creditors pledged to inject working capital to facilitate the resuscitation of operations.

This was after the company experienced some technical delays in securing an institutional investor to inject at least $30 million needed to revamp the whole production process.

It is hoped that with immediate injection of minimum capital, the textile giant would start production on a very small-scale, producing samples to facilitate the procurement of orders from the market.

It is envisaged that production would then increase gradually from levels ranging between 20 percent and 30 percent as more orders are received.

It also envisaged that the minimum capital would also be used to carry minor repairs and maintenance on selected machinery and equipment, which will allow the firm to start production.

The resuscitation of operations at Merlin would see the company not only focusing on producing napkins but a range of high quality and high demand products such as diapers and women sanitary wear, face towels, morning gowns, bed sheets, baby carriers, bath mats, wrappers and kitchen towels.

A proposal has also been put forward that the company sets up its own ginning plant that would create a complete production cycle and also synergise with cotton growers.

Through the proposed ginning plant, the textile concern intends to produce and sell yarn, which was also on demand locally and in the region.

One of the city’s oldest textile companies, Merlin which was established in the 1950s used to employ over 1 000 workers when operating at full capacity. The Chronicle

Retrenched workers pour their hearts out