What really happened at Chihuri home? 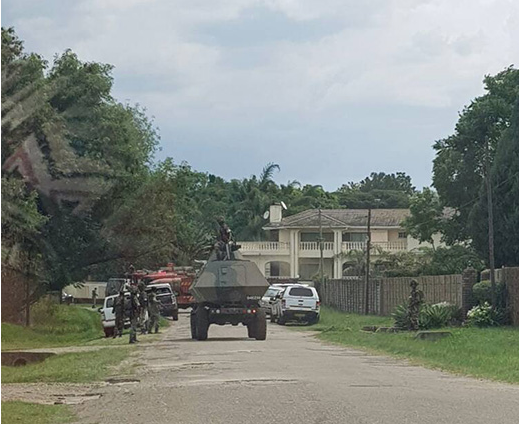 Chihuri was not at home at the time of the incident as he joined other service chiefs at the renaming ceremony of KGVI Barracks by President Emmerson Mnangagwa, near the State House.

His neighbours in the leafy suburb said they were disturbed by sudden but sustained heavy exchange of gunfire between members of the Police Protection Unit assigned to Chihuri’s residence.

They claimed one of the police officers went inside Chihuri’s home, raising the suspicion from his colleague that he could have been thinking of grabbing valuables.

Chihuri claims Matanga ordered cop to kill him and burn his…

Police officers assigned to guard VVIPs are confined to guarding duties and are barred from gaining access into the homes of their clients unless cleared to do so under special circumstances.

“One police officer went to the nearby house and took cover before firing at the other officer who was within Chihuri’s yard.

“From what we have heard so far, it appears one of the police officers was suspected of having gone into the inside of Chihuri home to steal valuables and is said to have started a fire in one section of the house.

“They exchanged fire for some time. It’s common here in Greystone Park to hear gunshots which are normally fired to scare away robbers but what we saw today was scary,” one witness told the Daily News at the scene of the shooting incident.

Police sources told the Daily News that an one officer who was off duty arrived at Chihuri’s home just before mid day and gained access into the yard where he was stopped by his colleague on duty.

A fight was said to have ensued leading to the officer who was off duty to grab a rifle from his colleague and fired several shots before storming into the house and set fire.

“Investigations are continuing but the incident is just bizarre and a joint team comprising the president’s office, our detectives and the military will try to establish what happened.

“The incident is not an act of robbery or arson it could be that someone wanted to cover up for something because why burn the house if a police officer was after stealing a television set and other valuables as is being said,” a police source told the Daily News.

Chihuri’s mobile phones were switched off.

But he had left the newly-renamed Tongogara Barracks before Mnangagwa had finished officiating suggesting that he had been informed of the developments at his residence.

Home Affairs minister Obert Mpofu said he was unaware of the incident.

“I have not heard about that one; when did it take place?” asked Mpofu.

Efforts to get a comment from the police were futile.

Inside the Josiah Magama Tongogara barracks, a senior army official came in while Mnangagwa was delivering his speech and approached Chihuri and Zimbabwe Defence Forces commander Constantino Chiwenga.

Chihuri immediately left while Chiwenga went out and conversed with some soldiers who immediately followed the police chief.

When the Daily News arrived in his neighbourhood, heavily armed soldiers and intelligence operatives had combed the road leading to his house.

The Fire brigade brought two tenders although there was no ambulance suggesting that they might not have been fatalities during the shooting.

The special unit from the army left after a lengthy period of surveillance and combing of the area — leaving special intelligence teams carrying forensic work.

Since the military intervention of last month which eventually led to events forcing former president Robert Mugabe to resign, there has been a lot of speculation that Mnangagwa could retire Chihuri as part of reconfiguration of the security sector.

During Mnangagwa’s inauguration on November 24, Chihuri got a rude awakening when he was roundly booed by the 60 000 people who had filled the National Sports Stadium to witness the historic event.

The police chief who was pledging his allegiance to Mnangagwa appeared shaken by the unexpected crowd reaction and his voice quivered as he made his pledge.

Many Zimbabweans are not happy with the police force because of their once ubiquitous roadblocks and use of spikes which they claimed were meant to extort them money.

Chihuri has been in his position for more than 23 years, having been rewarded with a contract renewal over 13 times since 1997.

He took over the reigns as acting commissioner in 1991, replacing Henry Mukurazhizha.

In 2008, he was appointed to commissioner-general.

His term was extended by four years.

Previously there have been documented cases of police officers guarding VVIPs either involved in fatal shooting incidents or exchanging gunfire.

In October 2015, a police officer shot his colleague who was at Mpofu’s home in Gunhill, Harare, before he tried unsuccessfully to cover up for the incident.

Lloyd Salobe, 29, was brought before the courts where the State said on the day in question, he had planned to see his girlfriend who was employed as maid at Mpofu’s home.

He was accused of shooting his colleague — Hazel Mutasa in the abdomen with an AK 47 Rifle — leading to her needing emergence hospital services.

Salobe had allegedly abandoned his guarding duties at the home of a High Court Judge in Highlands and went to Mpofu’s home with the intention of seeing his maid. Daily News

No attempt to arrest Chiwenga, claims Chihuri in explosive affidavit