In yet another bizarre religious occurrence, a self-proclaimed Gweru-based prophet ordered one of his congregants to eat a live chicken as part of a “deliverance” ceremony. 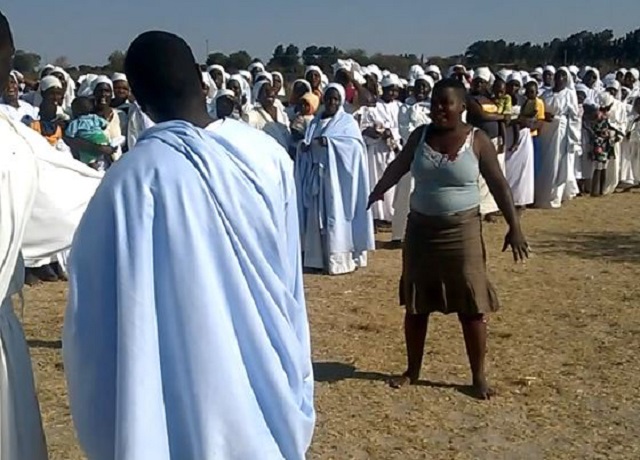 Members of the apostolic sect filmed the act in a video shown below during a recent church service at the shrine opposite Mkoba Teachers’ College.

A congregant yesterday alleged the leader of the sect Madzibaba ‘Beswage,’ born Micky Mahove from Mkoba 1, said eating the chicken proved that believers can eat anything without ill effects.

Madzibaba Beswage, who now commands a huge following in the city due to his “miracles” allegedly said eating the live chicken was an act of faith that would heal the congregant.

He confirmed the incident but was not clear on whether the woman devoured the chicken on his instructions.

He said the weird act occurred during a church service when he prophesied to the woman (name withheld) that she was possessed with an evil spirit which has been devouring her children.

“I prophesied to the woman that she was a witch as she had devoured her two children, allegations which she was denying. This is when I ordered the spirit to manifest in her. At once she went into an trance, took a live chicken which was at the shrine and started eating it,” said Madzibaba Beswage.

He said the woman returned to normalcy after taking a leap of faith and getting prayers. Contacted for a comment, the woman said she has a hazy recollection of what transpired.

“I went to Madzibaba Beswage’s shrine where l wanted to get cleansed of some troubling spirits. Madzibaba prophesied that I had an evil spirit which makes me eat my children.

“While I was trying to argue with him, I fell into a trance for almost 30 minutes. I didn’t know what I was doing. All I know is that I recovered to see blood stains on my body. My friends told me that I ate a quarter of live chicken while in a trance,” said the woman. The Chronicle