Zanu PF apologist, and former head of the party’s online propaganda tool, Edmund Kudzayi ‘Amai Jukwa’ has been revealed as the man behind the controversial anti-Vice President Emmerson Mnangagwa video that was played in an explosive politburo meeting a few weeks ago.

The video, which made sensational claims that Mnangagwa was attempting to topple Robert Mugabe was played during a fiery politburo meeting at the Zanu PF Headquarters in Harare, Zimbabwe.

The politburo is Zanu PFs highest decision making body. It was convened after factional tensions reached an all-time high, with people loyal to Emmerson Mnangagwa attempting to engineer the expulsion of the party’s National Political Commissar, Saviour Kasukuwere.

The move, which would have severely weakened the G40 faction; loyal to Grace Mugabe, sprung up to Kasukuwere’s defense, with Professor Jonathan Moyo taking center stage in the matter.

In the buildup to the meeting, Khuluma Afrika exclusively revealed that a documentary was being prepared by Minister, and would include several pointers as to why Mnangagwa was a sinister politician.

In the aftermath, the video was leaked through intelligence sources and published on video sharing site YouTube.

It did not last long though. Within 72 hours it was taken down for copyright violations.

In accordance with YouTube policy, the video sharing site owned by Google publishes data of the copyright claimant.

As shown in the below picture, the owner of the video, who would have needed to prove to the online giant that he is the original author and producer of the video is none other than Edmund Kudzayi. 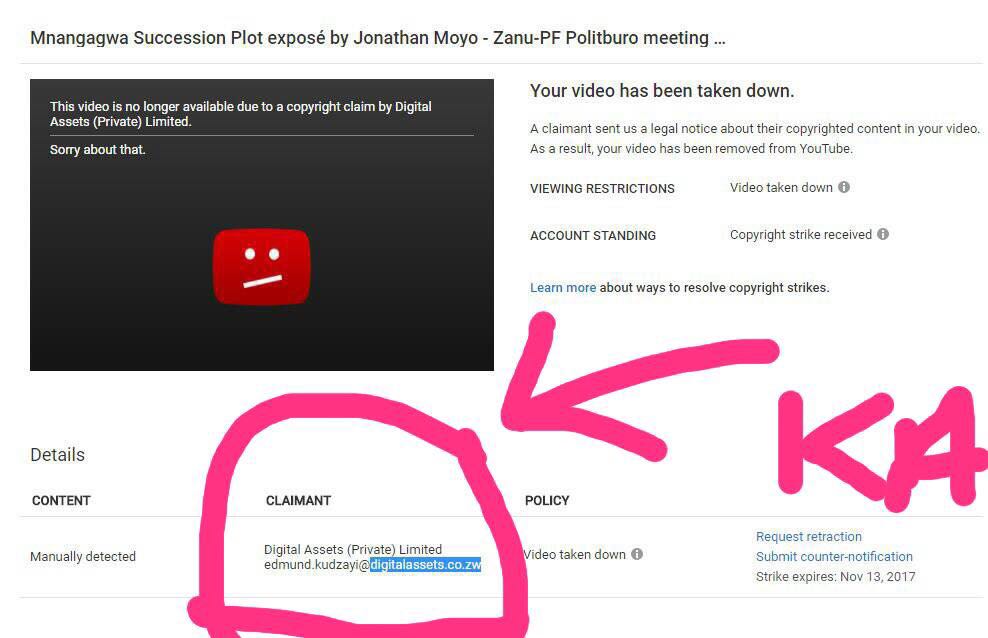 Further enquiries confirmed that it was indeed the Zimbabwean based tech maverick who initiated the copyright take down.

To initiate a takedown, Kudzayi would have had to verify his identity as well as professional capacity.

Kudzayi rose to fame in 2014 after he was arrested and accused of running the Baba Jukwa and Amai Jukwa Facebook pages simultaneously.

He then received over a quarter a million United States Dollars from the military intelligence to essentially find himself.

He was discharged nearly a year later, but not before confirming that he had been the man behind the Amai Jukwa page.