Dribbling wizards of football in Zimbabwe – A tribute

One day a book will be written on the history of Zimbabwean football from its inception to the present day. This will be a mammoth task and will demand a full commitment to the cause. When this book is written a chapter will surely be dedicated to the dribbling wizards who have illuminated our football pitches. 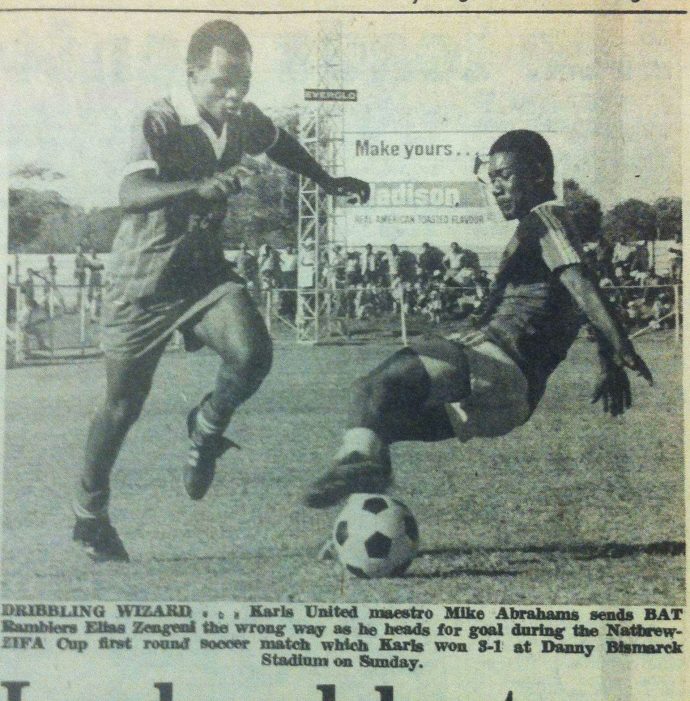 As we wait for this book to see the light of day, I will take this opportunity to talk about the dribbling masters who gave defenders a torrid time with their mesmerising skills.

The list is long and I hope to cover as much ground as possible. However as in all matters, it will not be possible to talk about everyone, whatever omissions I make are not out of disrespect of those left out.

In modern football, the art of dribbling is fast disappearing. The exquisite dribbling skills of the past generation seem to have been sacrificed on the altar of possession football. On the world stage, players like Sir Stanley Mathews known as the “Wizard of the dribble”, given a knighthood while still playing, Garincha accepted as the greatest dribbler off all time, George Best so popular he was known as the “Fifth Beatle” or Johan Cruyf , the man who invented the “cruyf turn” are now hard to find. What about Maradona, he needed at least five defenders to stop him, the Brazilian Ronaldo, the current Ronaldo and Jay Jay Okocha all blessed with mesmerising skills. They seem to be relics of a bygone era.

As earlier stated, the game of football keeps on evolving. The days of free flowing football are now a rarity with coaches now emphasising possession football at the expense of individual creativity. The new football philosophy these days is to keep possession as much as possible and any attempt to dribble which might lead to loss of possession will invite the coach’s wrath.

Players have become less confident to try anything audacious lest they make mistakes. The coaches are less forgiving in this regard and can drop the player.

On the world stage currently only players like Messi, Arjen Robben and Ronaldo freely express themselves on the pitch with dribbling attempts. Riyad Mahrez is another with amazing dribbling skills but he does not express himself as much. When Craig Shakespeare was appointed coach at Leicester, he started dropping Mahrez. It is easy to discern why, his trickery was deemed a luxury. Coaches prefer grafters .

The death of the natural winger has also contributed to the art of dribbling losing its place in modern football. These days wingers have become wingbacks with new responsibilities not only to track back but also attack. In such a role, mistakes have to be minimised and it will take a brave player to attempt a dribble. There is no room at all for error and coaches will not accept any. This has marked the death of this art.

Zimbabwe has not been spared either with very few mesmerising dribblers emerging in the past decade. I have watched Khama Billiat, he is a good dribbler. I have read rave reviews about Clive Rupiya and Leeroy Mavhunga young players who might grow to be masters of their trade. However , I still wait with bated breath for someone to emerge who can recapture the mesmerising skills of past masters.

What about in the past, who are some of the dribbling stars who made us pack stadiums by 10 o’clock in the morning for the traditional 3 o’clock kick off. For indeed we waited patiently in the baking sun for the artists to come and entertain us in our very own theatres of dreams…Rufaro, Gwanzura, Barbourfields, Ascot, Sakubva, Cam and Motor stadiums to mention a few. The expectancy levels were the same.

My research has revealed that there were a lot of exquisite dribblers before independence. I will mention Patrick Dzvene who was one of the founding members of Dynamos. He mesmerised defenders with his fancy footwork and earned himself the moniker “ Amato the Devil.” When he transferred to Ndola United becoming the first black player to sign for a foreign team, he caught the attention of both Aston Villa and Arsenal .Ndola were however unwilling to release their prized asset.

They used the body swerve to maximum effect and speed was also an effective weapon .Another master dribbler was Majuta “Jujuju” Mpofu, stocky and with bags of tricks. I have deliberately left out George Shaya on this list because the Mastermind was a complete package and it would be unfair to single out one quality in his style. He was an accomplished dribbler though.

The post independence era was equally exciting, many players enticed fans to stadiums at the mere mention of their name. The top gun of this era has to be Boy Ndlovu, real name Maxmillion but also nicknamed “The Menace”. This was not an exaggeration, the diminutive winger was a real threat. He specialised in the nutmeg known in local parlance as “deya” and many a great defender fell for this trick. Boy did not rely much on the body swerve, he would simply kill the ball dead and before the defender knew it, it will be through the legs and Boy would be on his way.

I watched him in one match when he gave legendary defender Size Torindo a torrid time. On more than three occasions , he would nutmeg big Size Torindo until the defender resorted to strong arm tactics, he decided to take the man and the ball.

Another story is told about tough as teak defender Sunday Marimo. Many claim that the legend decided to hang up his boots after an encounter with Boy which left him nursing a sore back. It is difficult to verify this claim but that the claim is made shows how Boy’s legendary dribbling skills are embedded into Zimbabwe football folklore.

Vitalis Takawira nicknamed “Digital” comes close to matching Boy’s exploits. Vitalis was simply unplayable and unstoppable with his bags of tricks. In a match for the Warriors, he reduced one of the defenders to tears forcing him to go for an early shower after being red carded. He simply could not cope with Digital. He scored a hat trick on this occasion. Vitalis was unbelievable.

Close on the heels of these wizards was Edward “Madhobha,Twinkletoes” Katsvere. The man was amazing, the way he toyed with defenders before leaving them on their backsides was simply scintillating. I remember well his battles with Graham “Iron Man” Boyle , a tough defender but Madhobha always came out on top.

I also remember how he destroyed Shooting Stars of Nigeria in one match. His skills left an indelible mark on my mind. Close to Eddie was Mike “Maburugwa” Abrahams known also as the touchline magician. He hogged the touchline and defenders who tried to tackle him did so at their own peril. One versus one with a defender would result in one outcome, the defender sitting on turf trying to get back to his feet with Maburugwa nowhere in sight.

It is also important to mention Stanley” Chola “ Manyati. Manyati used one skill also known in local terms as the “mbama”, the clap. He would drag the ball in one swift movement and by the time the defender tried to tackle , Manyati would be gone.

One has to see this skill to understand it. Many fans do not usually think of Peter Ndlovu as a dribbler but he did get past defenders with ease. One moment does not define a player but his moment of magic against South Africa convinced many of his ability.

He left two defenders dead by the corner flag and even had the audacity to do a double shuffle as he passed the ball into the net. Tauya Murehwa relied on the body swerve and a sudden change of direction so did Ronald Sibanda. Moses Chunga did multiple step over forcing defenders to keep retreating. He toyed with defenders at will.

The history of Zimbabwe football is a rich one packed with many topics for exploration. It will be a shame if it is not fully recorded. This article makes a small contribution and I hope it will encourage debate about these dribbling wizards who are a part of this rich legacy.