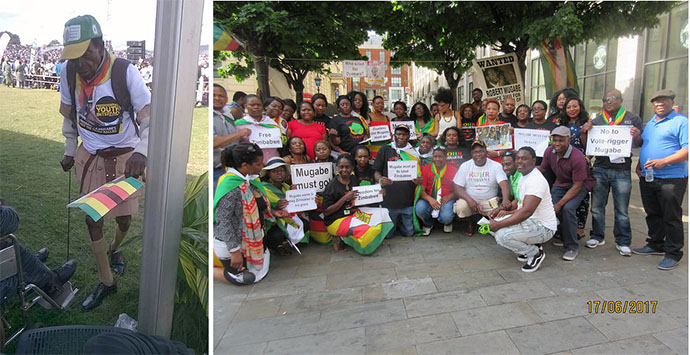 When it comes to straight talking Zimbabweans don’t have to look much further than the Manicaland Provincial Affairs Minister Mandi Chimene, who welcomed Mugabe to Mutare for a Zanu PF Youth Rally.

‘Some of you think I have taken weed’, she said. ‘Do I look like someone who took weed today?’ Mugabe said nothing. You could say he sat stoned-faced. Vice President Mnangagwa however, who was sitting next to him, must have had difficulty suppressing a smile.

Chimene, speaking as it were from on high, urged Mugabe to end the divisions in the party over the presidential succession. ‘We end up seeing crocodile smiles because of the divisions,’ she snorted.

Chimene proceeded to demonstrate that she was in full possession of her senses by accusing ministers in the province of looting large tracts of land, among other things. She went on: ‘If it means going down with you, we will fall together Comrade President’.

Mugabe, who is quite capable of falling down by himself, made no response to this offer. But he would hardly have been reassured by Chimene’s undertaking the previous week to Zanu PF Youth leaders preparing for the rally. She promised them they would have no trouble with police road blocks. ‘You said some vehicles do not have wheels, but I will make sure you will not be harassed.’

Who needs wheels when you have mbanje power.

For latest Vigil pictures check: http://www.flickr.com/photos/zimbabwevigil/. Please note: Vigil photos can only be downloaded from our Flickr website. The facebook page for our sister organisation Restoration of Human Rights in Zimbabwe (ROHR) (https://www.facebook.com/ROHR-Zimbabwe-Restoration-of-Human-Rights-301811392835) has been hijacked by destructive elements from a group calling itself ZHRO. Please be advised that any postings on this page are not posted by ROHR.

FOR THE RECORD: 54 signed the register.