All public buses must be compulsorily fitted with devices that stop them going over speed limits as a road safety measure to cut deaths from road accidents, the Passenger Association of Zimbabwe (Paz) has said. 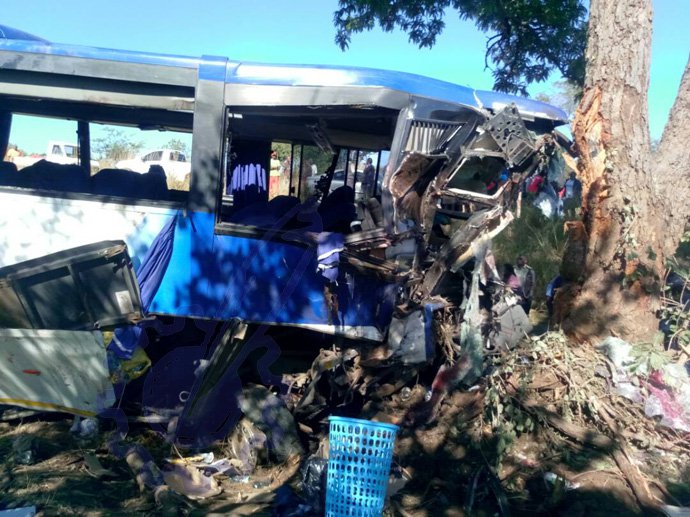 Paz made the proposal after 45 people were killed when the driver of a passenger bus lost control of the vehicle in north-western Zimbabwe on Wednesday night, and rammed onto a huge tree.

The speed governor is a device that measures and regulates the speed of a vehicle.

Paz said it is the perfect device to tame the speed devils of Zimbabwe, promising to do what the traffic police have not been able to: stop speeding, one of the biggest road killers.

Police spokesperson Charity Charamba said that 43 people died at the scene of the accident, while two others died of their injuries on Thursday morning.

A total of 67 passengers were travelling on the bus, with several of them severely injured.

The driver failed to negotiate a curve at the 257km peg along the road from the capital, Harare, towards the Zambian border town of Chirundu.

Police have identified 26 of the people who perished in the fatal road accident involving the King Lion bus near Nyamakate Shops.

Paz president Tafadzwa Goliati said government must seriously consider ideas for reducing speed limits on Zimbabwe’s roads, including alarm warnings which sound in buses if they go over the speed limit or speed limiters which actually slow the public transport down automatically if it goes above the speed limit.

“We request that all buses and kombis should have a speed limiter or governor device; that all long distance including cross border transporters should be banned from night travel; that Vehicle Inspection Department (VID) and police should strictly regulate and enforce bus fitness and that bus owners and drivers’ negligence should be heavily penalised, of which the latter will require parliamentary legislation,” Goliati said.

But many public transport operators, who declined to be named, said government, through police, should concentrate on dangerous drivers rather than overzealously enforcing speed limits.

Goliati said speeding; driving under the influence of alcohol, burst tires and night driving were the major causes of fatal accidents.

Charamba said the police have established that some cross border buses were being used for smuggling goods at night as evidenced by a large consignment of cigarettes which was found in the King Lion bus.

“Members of the public are being warned to desist from unlawful practices as the law will soon catch up with them,” the police spokesperson said.

Goliati said it was unfortunate that King Lion was involved in a second tragedy after the 2015 Kafue Zambia accident that claimed eight lives and injured 53, again due to speeding.

An official from King Lion declined to comment substantively on the accident.

“I have no information for you. We are still waiting for the police,” a spokesperson said, before hanging up the phone.

Vice President Emmerson Mnangagwa said at a Parliament symposium on Friday that relatives of the deceased will get State assistance.

“We are meeting at a time when our nation is mourning the untimely death of over 40 people in a tragic accident along the Harare-Chirundu highway, an event which has since been declared a national disaster,” Mnangagwa said.

“We join the bereaved families at this dark hour as they come to terms with this tragic occurrence coming so soon after a similar mishap barely three months ago new Mvuma. I wish the injured a speedy recovery.”

Charamba also appealed to members of the public who are missing their relatives to go to Chinhoyi Provincial Hospital mortuary for identification of the remaining bodies. Sylvester Mutindindi, acting secretary general of Zimbabwe Congress of Trade Unions (ZCTU) said the survivors of the horrific accident will require extensive systematic counselling for them to get over the traumatic experience.

“Labour urges drivers to be extra careful on the roads and stick to laid down speed limits to avoid such unnecessary loss of lives,” Mutindindi said, adding those killed were breadwinners as cross border traders who were working hard to fend for their families. Daily News