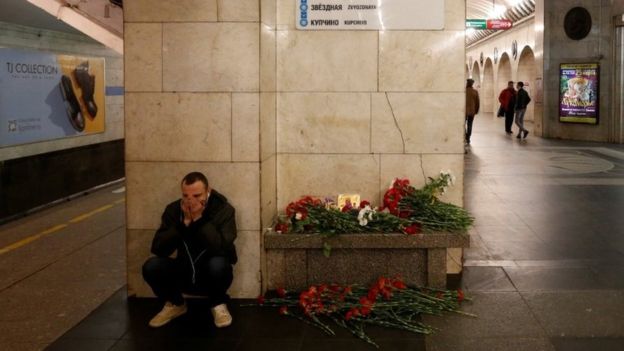 The St Petersburg metro explosion was caused by a bomb that was possibly detonated by a man whose body parts were found on the train, Russia’s state investigative committee has said.

Fourteen people died and 49 were injured in the explosion between two underground stations on Monday.

The Russian committee said it had identified the suspect but declined to name him.

It said he was born in the Kyrgyz second city of Osh in 1995 and had obtained Russian citizenship.

Biden tells world leaders ‘America is back’ but…

In a statement, the Russian state investigative committee said: “It has been ascertained that an explosive device could have been detonated by a man, fragments of whose body were found in the third carriage of the train.

“The man has been identified but his identity will not be disclosed for now in the interests of the investigation.”

No group has said it was responsible for the bombing.

Russian Foreign Minister Sergei Lavrov, at a meeting with his Kyrgyz counterpart Erlan Abdyldayev on Tuesday, said the attack “once again shows the importance of stepping up joint efforts to combat this evil”.

Authorities in St Petersburg have declared three days of mourning.

Russian Health Minister Veronika Skvortsova said the death toll had risen from 11 to 14 after three people died in hospital.

President Vladimir Putin, who was in St Petersburg – his home city – when the blast occurred, visited the scene on Monday evening and laid flowers at a makeshift shrine.

The White House said President Donald Trump had spoken to Mr Putin by phone and offered “full support” in bringing those responsible to justice.

“Both President Trump and President Putin agreed that terrorism must be decisively and quickly defeated,” a statement said.

UK Prime Minister Theresa May said she had written to President Putin to offer her condolences.

“This shows the terrible terrorist threat that we are all facing,” she added.

“I’m very clear, as the people of the UK were after the attack in London, that we will prevail. The terrorists will not win.”

The blast occurred on Monday afternoon after the train had left Sennaya Ploshchad station.

Senior investigator Svetlana Petrenko told Russian media the train driver’s decision to continue to the next station, Tekhnologichesky Institut, had almost certainly helped save lives, as it allowed people to be rescued quickly.

Train driver Alexander Kaverin told reporters: “I just followed the procedure. You will know that this isn’t the first terrorist act that we’ve had, there’ve been explosions before, so smart people came up with smart procedures.

“And these procedures say that in this situation I had to take the train to the nearest station. This is what I did. The train kept moving. There was a bang and lots of dust, but the train kept on moving.”

The discovery of an explosive device at another station, Ploshchad Vosstaniya, on Monday also suggested a co-ordinated attack.

Tuesday saw bomb alerts at Sennaya Ploshchad station – which reopened after being shut for several hours – and the city’s university.

St Petersburg’s metro system, which is used by more than two million passengers every day, has not suffered previous attacks.

Several transport hubs in Russia have, however, been attacked. In 2010, 38 people died in a double suicide bombing on the Moscow metro.

And a year later, a bomb exploded on a high-speed train travelling between Moscow and St Petersburg, killing 27 and injuring another 130.

Both attacks were claimed by Islamist groups. BBC News

Biden tells world leaders ‘America is back’ but Pompeo digs in

Employee of Merkel’s press office suspected of spying for Egypt