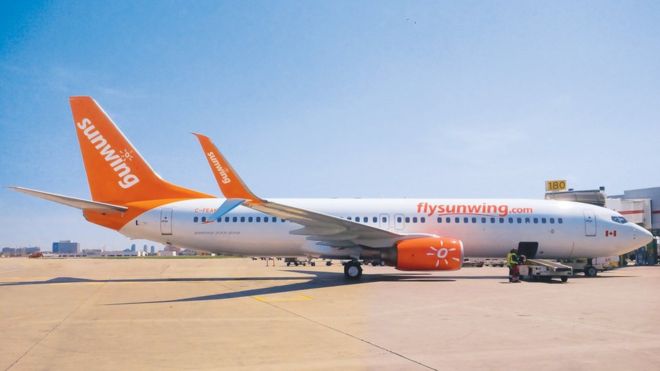 A pilot who was found drunk in the cockpit before a flight in Canada has been sentenced to eight months in jail, minus time already served.

Miroslav Gronych, 37, a Slovak national, pleaded guilty on 21 March to being impaired while in control of an aircraft.

He was arrested on New Year’s Eve after passing out in the cockpit of a Sunwing flight.

He had more than three times the legal limit of alcohol in his body.

On Monday, Alberta provincial court judge Anne Brown imposed a one-year flying ban on Gronych, to take effect after he has served the prison sentence.

When he boarded the plane in Calgary on New Year’s Eve, Gronych struggled to hang up his coat and was slurring his words.

According to a statement read to the court in March, the co-pilot suggested that Gronych leave the plane, but he sat in the pilot’s chair and appeared to pass out “resting his face on the window”.

His pilot’s wings were attached upside down on his uniform and an empty bottle of vodka was later discovered in his hotel room.

The flight, operated by a division of the Sunwing budget airline, later left Calgary for Cancun, Mexico, with a different pilot.

There were more than 100 people on board.

Sunwing did not respond to a request for comment. BBC News

Zimbabweans ranked among the poorest