Eleven people have been killed and 45 injured in an explosion between two underground stations in St Petersburg. 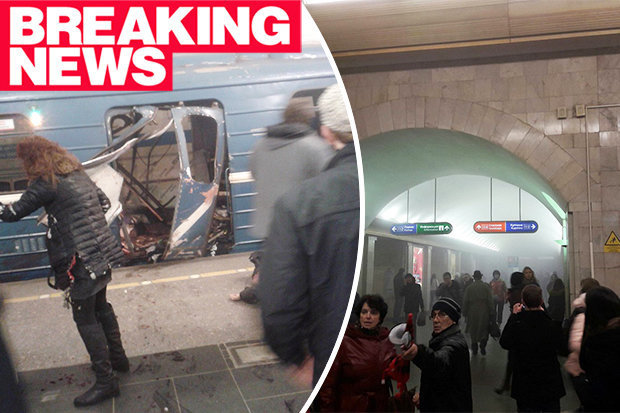 The head of Russia’s National Anti-Terrorist Committee said the blast hit a train between Sennaya Ploshchad and Tekhnologichesky Institut stations.

The committee said an explosive device was later found and made safe at another station nearby.

An anti-terror investigation has been opened, but other possible causes are being investigated.

The first images posted on social media showed a train at a platform in Tekhnologichesky Institut station with a hole blown in its side, along with a number of casualties.

Initial reports suggested there had been two explosions, one each at Sennaya Ploshchad and Tekhnologichesky Institut stations.

But the Russian National Anti-Terrorist Committee later confirmed there had been only one explosion, between the two stations, at about 14:30 local time (11:30 GMT).

Senior investigator Svetlana Petrenko told Russian media the train driver’s decision to continue to the next station almost certainly helped save lives, as it allowed people to be rescued quickly.

Health Minister Veronika Skvortsova said 10 people had died – seven at the scene, one in an ambulance and two in hospital. The death toll was later raised to 11.

What was the cause?

Andrei Przhezdomsky, the head of the National Anti-Terrorist Committee, said the explosion was caused by “an unidentified explosive device” but that the exact cause had yet to be determined.

President Vladimir Putin said all causes, especially terrorism, were being investigated. He was in St Petersburg at the time of the blast, his spokesman Dmitry Peskov said.

The discovery of an explosive device at another station, Ploshchad Vosstaniya, indicates the attack was deliberate, and reports in Russia say the explosion came from a briefcase left on the train.

St Petersburg’s metro system is the 19th busiest in the world, with more than two million passengers every day, but it has not suffered attacks before.

Several transport hubs in Russia have, however, been attacked. In 2010, 38 people died in a double suicide bombing on the Moscow metro.

And a year later, a bomb exploded on a high-speed train travelling between Moscow and St Petersburg, killing 27 and injuring another 130.

Both attacks were claimed by Islamist groups. BBC News

NTA is the only solution to sustainable peace

South Africa’s credit rating has been cut to junk status