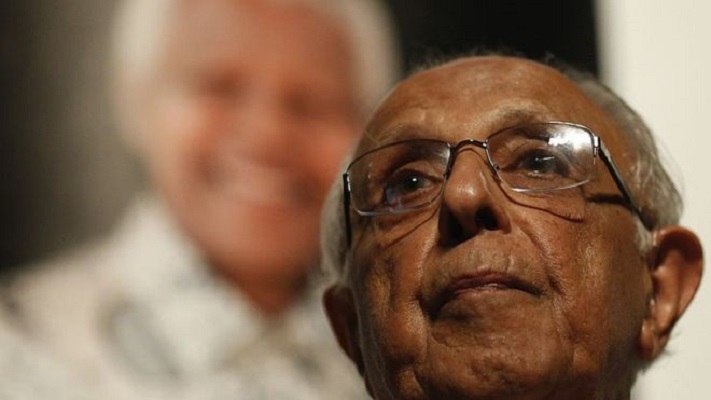 It says Mr Kathrada passed away peacefully in a Johannesburg hospital “after a short period of illness, following surgery to the brain”.

Along with Nelson Mandela, Mr Kathrada was among eight African National Congress activists sentenced to life imprisonment in 1964.

They were convicted of trying to topple the white minority government.

He is due to be buried on Wednesday at a private ceremony, but President Jacob Zuma has said that flags should fly at half mast in his honour and that public memorial service will also be held.

Jacob Zuma supporters gather in Nkandla to celebrate his…

Zuma’s parole ruling “out of kilter with our Constitution”

Mr Kathrada, affectionately known as Kathy, was not only one of Mr Mandela’s closest friends, but also a human rights activist in his own right who had a long history in the struggle against discrimination and apartheid, says the BBC’s Milton Nkosi.

The death of Ahmed Kathrada emphasises that a golden generation of anti-apartheid heroes has nearly gone.

Along with the likes of Nelson Mandela, Oliver Tambo and Walter Sisulu, he was part of a group untainted by corruption, acting as a moral compass for the nation.

His generation literally gave up most of their adult lives to fight to liberate black people from the yoke of white minority rule.

“Uncle Kathy” stayed relevant to the struggle of the downtrodden till the end.

He was critical of the current administration, asking President Zuma to resign following a damning court judgement against the president.

His significance in the anti-apartheid struggle was also to deracialise it.

He proved that the fight was not just left for black Africans to wage on their own, and that is how I will remember him.

Apartheid was a legalised system of discrimination against non-white people introduced in South Africa in 1948.

But laws that discriminated against non-whites existed prior to that.

Born into a family of Indian origin in 1929, Mr Kathrada was affected by those laws.

Why was he jailed?

Mr Kathrada spent more than 26 years in prison, 18 of which were on the notorious Robben Island, where Mr Mandela was also jailed.

He was arrested in 1963, along with several others, at a farm in the Johannesburg suburb of Rivonia. They had been meeting there in secret to plan the armed struggle against the apartheid government.

The following year Mr Kathrada was found guilty of conspiring to commit acts of violence. Seven other defendants, including Mr Mandela, were also convicted of conspiracy and three other charges.

They all received life sentences and most went on to spend the majority of their time in jail on Robben Island.

Under apartheid, even prisoners were treated differently depending on their racial origin: White prisoners got the most privileges, followed by those of Indian origin, while black people got the least.

Mr Kathadra refused to accept his privileges unless they were also extended to his black comrades.

After South Africa’s first democratic elections in 1994, President Mandela persuaded Mr Kathrada to join him in government as his political adviser.

Mr Kathrada left parliament in 1999, but remained active in politics,

He went on to chair the Robben Island Museum Council, set up to preserve the prison as part of South Africa’s heritage.

A life of struggle

He was the fourth of six children born in the North West Province, previously known as Western Transvaal.

Mr Kathrada was a campaigner from a young age and joined the Young Communist League at the age of 12.

He later became a member of the Transvaal Indian Congress, which spearheaded campaigns against laws that discriminated against Indians, and joined their protests at 17.

In 1952, he received a suspended sentence for helping to organise an anti-apartheid defiance campaign, with black activists including Mr Mandela and Walter Sisulu.

Four years later he was charged with high treason, but was acquitted after a long trial.

In 1962 he was placed under house arrest and then took his activities underground to work with the military wing of the African National Congress.

What happened to the Rivionia defendants?

After Mr Kathrada’s death, there are only two surviving members of the group who were convicted at the Rivonia trial in 1964.

Denis Goldberg, 83, continues to speak out on South African politics. He told the BBC that “Kathy” was “much more than a friend. [He was] a comrade. We faced the prospect of the gallows together”.

Andrew Mlangeni, 91, is also still alive. He served as an MP in the country’s first democratically elected parliament from 1994 to 1999.

Nelson Mandela died in 2013 at the age of 95. He became South Africa’s first democratically elected president in 1994.

Govan Mbeki died in 2001 at the age of 91. He served in the upper house of South Africa’s parliament from 1994 to 1999. His son Thabo succeeded Mr Mandela as president.

Raymond Mhlaba died in 2005 at the age of 85. He served as the national chairperson of the South African Communist Party, he also was the country’s high commissioner in Rwanda and Uganda.

Elias Motsoaledi died in 1994 at the age of 69 the day before Mr Mandela was inaugurated as president. BBC News

Jacob Zuma supporters gather in Nkandla to celebrate his presidency

Zuma’s parole ruling “out of kilter with our Constitution”